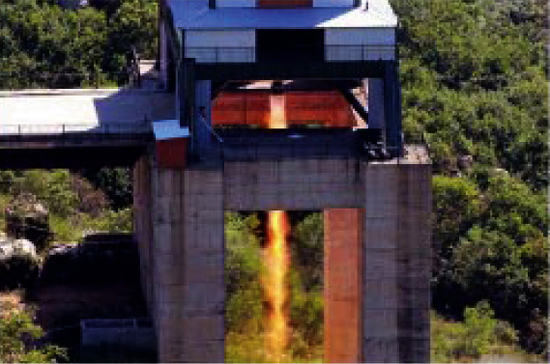 A high-powered rocket engine is being fired during a ground test at Sohae Space Center in North Pyongan Province in a photo carried by the Rodong Sinmun Tuesday. [RODONG SINMUN]

North Korea on Tuesday said it successfully conducted a ground test of a new high-powered engine designed for a geostationary satellite, its latest move to enhance its ballistic missile technology in defiance of repeated international warnings.

North Korea’s state-run media boasted of the test’s success, saying that during the 200-second working test a single engine’s thrust reached a force of 80 tons, which means it can lift an object that weighs 80 tons for 200 seconds, an improvement that brings the North closer to making of a missile capable of flying across the Pacific to the United States.

North Korean leader Kim Jong-un was present at the Sohae Space Center in Tongchang-ri in North Pyongan Province. The reports did not disclose the date of the engine test.

In an English dispatch carried by the state-run Korean Central News Agency (KCNA), the North said the outcome of the test showed “thrust and other technological indexes of the engine accurately reached the estimated values,” and noted the engine “remained stable throughout the working time.”

The KCNA report also described Kim as being satisfied with the test results and praising scientists for having succeeded despite a “short span of time.”

The report also quoted Kim as calling on the country’s aerospace development center to focus “on satellite development and the manufacture and launch of more satellites for different uses” so that the country could become “a possessor of geostationary satellites in a couple of years.”

Pyongyang’s drive for satellite technology is seen as a cover for its pursuit of ballistic missile technology, banned from the totalitarian state under existing international sanctions. In February, the North boasted of its successful launch of a satellite named Kwangmyongsong-4 at the Sohae launch site, the same site for its engine test.

In what could be a sign of the North’s satisfaction with the test, the Rodong Sinmun ran nine color photos of the rocket test scene on its front page on Tuesday. Some of the images include North Korean leader Kim. The main photo shows Kim smiling accompanied by officials clapping around him in an apparent celebration of the engine test.

If the North’s claim of the 80-ton force thrust power is true, it indicates an upgrade in the North’s grip on engine technology that can be used for a long-range missile. In the February test, the Kwangmyongsong-4 rocket was assessed to have had 120 tons of thrust using four engines in the first rocket stage. Each engine had a capacity of 30 tons of thrust.

If true, the North could develop a missile with a total thrust power of 320 tons, which experts say is powerful enough to reach the continental United States.

The South Korean military saw the engine test as the North’s check on its engine capability for use in an inter-continental missile and acknowledged an upgrade in the North’s engine technology based on Tuesday reports.

“We judge that the North tested a high-powered new engine system that can be used for a long-range missile,” said Jeon Ha-gyu, spokesman for the Joint Chiefs of Staff.