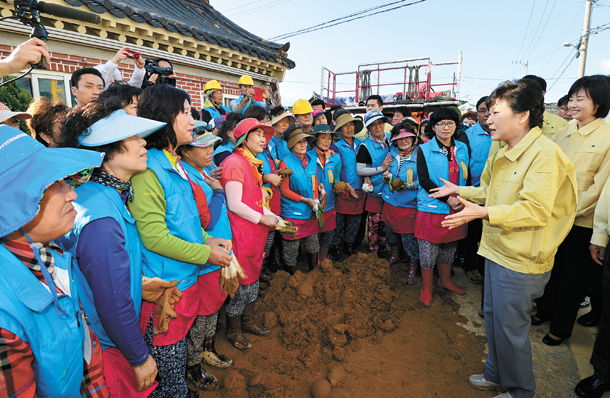 After a 4.5-magnitude aftershock hit the North Gyeongsang city of Gyeongju on Monday night in the same place as two large earthquakes only a week ago, residents are fleeing the region and making preparations for emergency flights.

“I cannot stay here anymore,” said Kim Ok-sun, a 67-year-old resident of Gyeongju. “I am going to my son’s house in Jecheon, North Chungcheong, where I will be far from all these tremors.”

Kim’s house is close to the epicenter of the 4.5-magnitude aftershock that came at 8:33 p.m. on Monday, according to the Korea Meteorological Administration, and only a few kilometers from the epicenter of the 5.8-magnitude earthquake of Sept. 12, the largest Korea has seen since 1978. There were no deaths, though 48 people were injured.

Since then, residents in Gyeongju have felt some 400 aftershocks. After the Monday aftershock, around 25 people additionally reported injuries, mostly from falling down as they fled their homes.

The rooftop of Kim’s home, made of giwa, or traditional ceramic roof tiles, was badly damaged in places and had sunken down a few inches. When a JoongAng Ilbo reporter placed a hand on the cracked wall, concrete pieces came loose and fell to the ground.

“I slept in my greenhouse on Monday night,” said Lee Choon-hwa, a 78-year-old resident of the city. “It’s the flattest area I can find near my house.”

Her 67-year-old friend, Seo Soon-hwa, added, “I’ve been taking pills for my headache everyday since the earthquakes last week. I’m scared there will be more coming.”

“What happens if another comes? What then?” asked a resident as she passed by, pushing a walker. Her hands shook as she talked to a JoongAng Ilbo reporter. 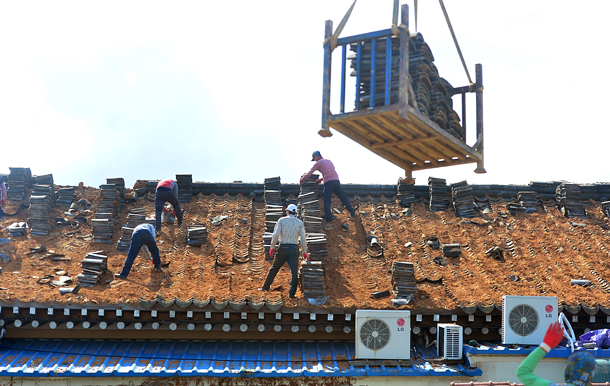 Construction workers replace shattered giwa, or traditional roof tiles, on the roof of a restaurant in Gyeongju, North Gyeongsang, on Tuesday. Some 2,000 reports of damaged roofs have been made in Gyeongju since last week’s earthquakes. [NEWSIS]

Residents of affected regions, which include neighboring cities of Gyeongju such as Ulsan, Daegu, Busan and Daejeon, are buying first-aid kits, food that can be stored for long periods and even survival packages.

“I ordered one of these survival backpacks online,” said a 30-year-old resident of Changwon, South Gyeongsang. “They cost 120,000 won [$107] and each bag contains a 1.8-liter [60-ounce] water bottle, a flashlight, canned meat, a lighter, a radio, a sleeping bag, first-aid medicine, a compass and more.”

Hwang added, “If a big earthquake is to hit the region again, my family and I are going to wear these backpacks and run to the nearest earthquake shelter.”

A 34-year-old resident of Ulsan surnamed Cho, who lives on the 19th floor of an apartment building, said he has been practicing how fast he can run down the stairs should another earthquake come.

“I ran up and down the 19 flights of stairs on Monday and today carrying my 6-month-old baby,” Cho said. “It turned out I can run down the stairs within six minutes.”

He added, “It’s better than just sitting there stricken with fear.”

Residents are taking additional measures to fend for themselves instead of trusting the government or other official agencies.

“I downloaded this mobile app that sends me alarms if aftershocks above a certain magnitude hit my place or nearby regions,” said a 36-year-old resident of Daejeon. “It’s better than relying on those late warning messages from the Ministry of Public Safety and Security.”

The ministry’s disaster warning text messages to the general public came nine minutes after the two large earthquakes, of magnitudes 5.1 and 5.8, hit Gyeongju on Sept. 12, drawing outrage from citizens, who expected to be notified within seconds. The warning messages also came 12 minutes after the 4.5-magintude aftershock hit the city on Monday night.

There are some 15 similar apps that issue earthquake warnings to users, and more than 2 million people have downloaded them.

Others are finding shelters on their own, too.

A 38-year-old resident of Gimhae, South Gyeongsang, said she was surprised to find so many people at an above-ground parking lot that she had personally chosen as a safe haven.

“I had heard from other moms that the above-ground parking lot of the outlet mall in my neighborhood is the safest place in the event of an earthquake,” she said. “So when the aftershock hit us on Monday night, I drove my family to the outlet, and lo and behold, it was packed with people.”

Experts warned the government to respond immediately to citizens’ lack of trust in authorities.

“People are buying these survival backpacks and finding shelters on their own because they’ve lost their trust in the government after the national response to disasters has been falling short of expectations,” said Chae Kyu-man, professor of psychology at Sungshin Women’s University. “The government should quickly create a national flight manual for its citizens and conduct nationwide practices.”

However, experts also denied the possibility of strong earthquakes hitting the region again in the near future.

“The 4.5-magnitude earthquake on Monday night was likely an aftershock of the earthquakes on Sept. 12, not a foreshock of an upcoming earthquake,” said Yoon Seong-ho, professor of earth science at Pusan National University. “While it is hard to say right now that a bigger earthquake will not come, the possibility of one coming is very low.”