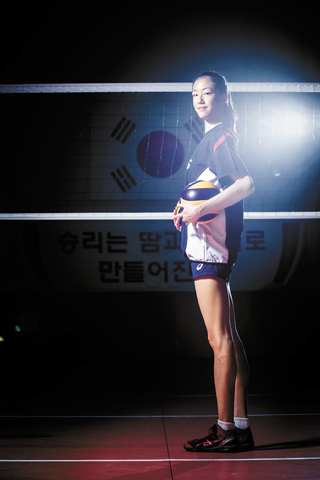 Jung Ho-young, 15 years old, is the youngest volleyball player to represent Korea in the senior team. With Kim Yeon-koung as her role model, Jung hopes to lead the Korean volleyball team one day. [PARK JONG-KEUN]

Standing at 1.89 meters (six feet two inches), Jung Ho-young was the newest face in women’s volleyball representing Korea at this year’s Asian Women’s Cup Volleyball Championship (AVC), and she is only 15 years old.

The final roster for the AVC was announced by the Korea Volleyball Association earlier this month, and Jung made the team to become the youngest volleyball player in history to don a Korean uniform in a major international event.

Jung made it onto the senior national team roster just two months after she was listed in the roster for the youth team. Although Korea finished eighth at this year’s AVC, it showed some promising talents, including Jung. In the final match against Vietnam yesterday, Jung tallied 10 points total while playing in all five sets, the most she’s scored throughout the tournament.

“I thought it was someone else with the same name as me,” Jung said when the JoongAng Ilbo sat down with her after the roster was announced. “Who would have thought me, still in middle school, would be selected in the national team.”

In the 2016 Rio Olympics, the Korean women’s volleyball team had hoped to medal, an honor that has eluded Korea in the sport for over four decades. But their bid to end the medal drought was curbed in the quarterfinals. After the Olympics, the inadequate support by the Korea Volleyball Association garnered attention and subsequently, the poor treatment that the women’s team received by the association provoked public outrage.

The top volleyball governing body admitted to the fault and vowed to provide support commensurable to the international standings of the women’s team, which is now 10th, according to the International Volleyball Federation. One of its initiatives includes rearing up-and-comers by allowing them to play in international events from an early age.

Jung, a wing spiker, is in her third year as a volleyball player and is still a novice in the sport, especially in terms of techniques such as serving, blocking and hitting. But she more than makes up for this physically.

“I am still growing,” Jung said. “I think I get my ability to jump so high from my father.”

Indeed, Jung comes from a family of athletes, and more precisely athletes from sports that require tall stature and the ability to jump.

Her father, Jung Soo-yeon, 1.82 meters, played basketball until middle school and was able to jump as high as 1 meter vertically. Her mother, Lee Yoon-jeong, played semi-professional volleyball and stands at 1.80 meters. Jung’s younger sister, So-yool, plays volleyball as a setter.

“My sister is the athlete of the family,” Jung explained. “I would miss PE class when I was in elementary school. I mean, I just didn’t like to move around and be physically active.”

But Jung was destined to find herself on the court. By the end of elementary school, Jung had grown 15 centimeters in two months, going from 1.67 meters to 1.82 meters.

“My mom asked what I would do with that height,” Jung recollected. “She told me I might as well try volleyball.” Her father liked the idea, especially since it is less physically aggressive compared to basketball.

But gifted though she may be physically, Jung still has all her work still ahead of her. Normally, a volleyball player starts playing at the age of nine or ten, which means Jung is behind her peers by about three to four years. More than anything else, she feels she needs to work on her level of fitness.

“I have to improve my flixibility and long-distance running,” Jung said.

She spent the first two years working on the fundamentals and fitness and it wasn’t until last year that Jung really started to get her hands on the ball. Jung knows she’s behind and does not shy away from evaluating herself critically.

“It is an honor to be on the national team,” she says, “but I know I am not a fitting talent yet.”

Green though she is, volleyball experts are more than optimistic about the young up-and-comer. Kim Cheol-yong, the national team head coach, said, “Her knees are fragile so we train her with this in mind. But she’s got the physique and if she takes time to learn the fundamentals and basic skills, I think she has the potential to become the next Kim Yeon-koung.”