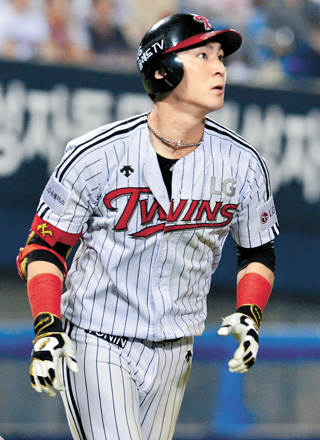 Oh Ji-hwan of the LG Twins is a rare talent found in the KBO, a slugging shortstop akin to Kang Jung-ho. [NEWSIS]

Kang Jung-ho may have left the Korea Baseball Organization (KBO) in January 2015 to take a swing at the Major League, but his leaving the KBO isn’t the end of the KBO’s line of slugging shortstops. With Kang out of the picture, Oh Ji-hwan of the LG Twins and Kim Ha-seong of the Nexen Heroes are looking to become the “next Kang” to continue his legacy.

In the history of the KBO, the position of shortstop was rarely synonymous with power.

Lee Jong-beom, now retired, and Kang were about the only big-hitting shortstops the KBO has had. Lee set the shortstop home-run record, cranking 30 dingers in 1997. Kang topped this record in 2014, belting out 40 in the KBO before he departed Korea to join the Pittsburgh Pirates. Along with a new record in home-runs, Kang also tallied 117 runs batted in, the most by a shortstop in a single season.

Shortstops often play a vital role in their teams’ fielding and those with exceptional fielding abilities were often given the starting shortstop position. In return, coaching staff expected less of them on the plate. A shortstop with power was therefore a rare talent and highly valued, one of the reasons why Kang made it into the majors.

After Kang, the number of slugging shortstops in the KBO seemed to wane. But then came Oh and Kim.

On Monday, Oh and Kim both slugged their 20th home runs of the season. Against Hanwha Eagles, Oh launched a three-run homer at the top of the seventh inning to lead his team. The Twins claimed 11-3 win over the Eagles.

Oh’s home run came at his home ground, Jamsil Baseball Stadium, where batters go to die as the stadium itself is even bigger than some Major League stadiums. Some call it the Twins’ “exodus effect,” referencing the fact that many sluggers hit their strides after leaving the Twins. But for Oh, this “exodus effect” seems to be less than meaningless as he sent off 11 of his home runs this season at the venue. 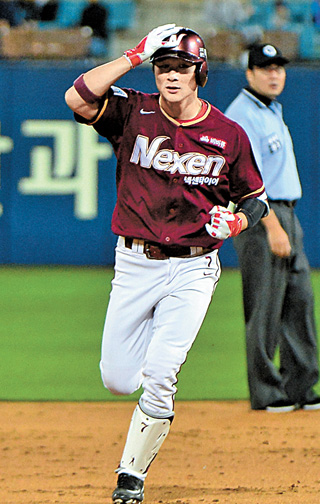 Kim Ha-seong of the Nexen Heroes rounding the bases after a homer during a KBO game. [NEWSIS]

Kim also shot off his 20th dinger on the same day against the Kia Tigers. After the homer, Kim joined the 20-20 club, a group of batters with more than 20 home runs and 20 stolen bases in a single season. He is the third shortstop to join the club after Lee and Kang.

The two shortstops have quite the road ahead of them before they can finally catch up with Kang, of course, but they have the potential to do so.

At the age of 20, Kim is still green, only in his third season in the KBO. Kim went in a limbo briefly after his 18th home run, unable to tally any since August. His batting average also plummeted in August, batting .163 for the month. But it took him less than a month to overcome the slump and as of Tuesday, Kim is batting .343 for September.