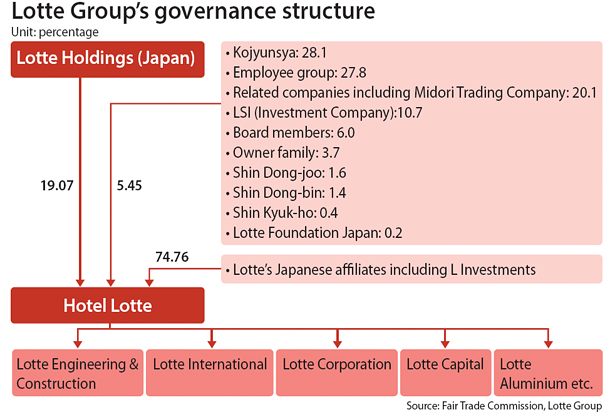 The future of Lotte Group seems ever bleaker as the retail giant now faces another charge by the nation’s antitrust agency. The Fair Trade Commission on Wednesday said it is asking prosecutors to investigate Lotte Group’s 95-year-old patriarch Shin Kyuk-ho for intentionally falsifying documents regarding the conglomerate’s governance and structure of affiliates.

The FTC’s latest move adds to the conglomerate’s troubles. For more than 100 days, the company has been embroiled in a growing embezzlement and tax evasion investigation that could lead to the arrest of the current acting chairman Shin Dong-bin.

Now, Shin Kyuk-ho is accused of omitting several affiliates from relevant reports from 2012 to 2015, including those whose major stakeholder happens to be his daughter.

Under the circumstances, the initial public offering of Lotte is not only unlikely to happen this year but the IPO could be suspended indefinitely. The company had hoped the hotel could improve its tarnished public image by enhancing governance and reducing control of Lotte’s Japan operation.

The FTC says that Shin Yu-mi, the 33-year-old daughter of Shin Kyuk-ho and former Korea actress Seo Mi-kyung is the second-largest stakeholder of four affiliates - Uniplex, Yuki Co., Yuwon Industry and Yuki International and also has an executive position in two. The No. 1 stakeholder of these companies was Shin Yu-mi’s mother Seo Mi-kyung.

“Lotte was regulated by the FTC on three accounts - 2005, 2011 and 2012 - for falsifying its reports but has repeated their illegal offense,” said FTC official Kim Jung-ki.

The penalty for falsifying reports intentionally won’t bring heavy financial damages to the conglomerate, as the maximum fine under the antitrust law is only 100 million won.

The FTC also added that Lotte also falsely reported that their overseas affiliates were “other shareholders” instead of “related companies.”

Officials levied a 573 million won fine on the conglomerate in May. Although the penalty is considered to be a soft punch on the giant’s arm, the revelation of the company’s dubious business practices is expected to further tarnish a reputation that was stained after a management feud between Shin Dong-bin and his older brother Shin Dong-joo escalated last year.

The turmoil also has hurt Lotte Group’s business plans, including the Hotel Lotte IPO that was initially scheduled for June this year. Since the Korean prosecutors’ office started its investigation in June, Lotte Group has postponed the offering.

Hotel Lotte is the de facto holding company of Lotte Group in Korea and 99.3 percent of the shares have been controlled by the Japan-based affiliates, including Lotte Holdings. If Hotel Lotte had gone public this could have lowered the ownership of the Japanese Lotte affiliates to 65 percent.

As the process of going public usually takes around four months, the chances of Lotte realizing an IPO this year are impossible. The withdrawal of the IPO has also shelved Lotte Group’s other business ambitions, including global M&As that it planned with the roughly 1.8 trillion won it could have secured through the public offering.

Shin Dong-bin had planned to buy duty-free businesses in the U.S. and Australia to raise the Korean retail group’s global rank from current third place to first. However, Lotte has given up on these acquisitions.

The group’s plan for global expansion in petrochemicals, which Shin Dong-bin has been seeking as a future growth engine for the conglomerate, has also collapsed. Lotte Chemical earlier this year also planned to acquire Axiall, an American petrochemical company, but had to relinquish its plans to Westlake in June. Shin Dong-bin has been expanding the Lotte empire through aggressive M&As where he spends roughly 7 trillion won a year. However, the situation turned unfavorable this year.

“Currently, everything is on full stop,” said a Lotte official. “We’re in so much chaos that we don’t have the leisure to even properly assess partial investment status we made in the first half.”

Shin Dong-bin was questioned by prosecutors for 18 hours starting Tuesday and was released at 4 a.m. Wednesday. The Lotte executive said while Korean shareholders have the tendency to respond after court rulings, shareholders in Japan could ask the chairman to step down if he’s investigated or indicted.

“We cannot rule out the possibility of Japan’s shareholders demanding Shin Dong-bin resign in case he is arrested,” said the executive.

If so this could lead to increasing the control of Lotte’s Japanese operation over the Korean businesses and Lotte Japan being led by the Japanese executive, including the 72-year-old Lotte Holdings CEO Takayuki Tsukuda.