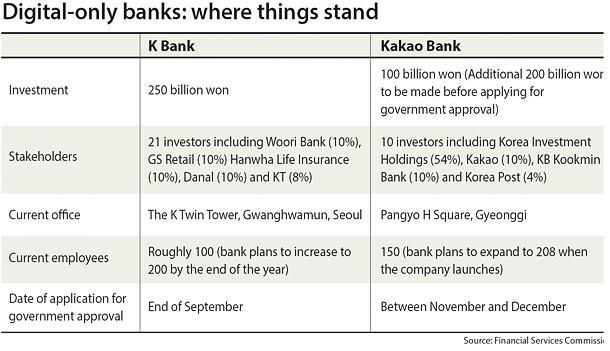 The financial industry’s much anticipated first Internet-only banks might not be able to get off the ground by the end of the year as envisioned due to political gridlock.

K Bank and Kakao Bank are in the final stages of preparation to launch by year’s end. Even during Chuseok, the two banks were working on their electronic systems and hiring new employees.

The new banks would give consumers wider choices. However, the biggest obstacle for the two banks is the Banking Act, a law that separates banking from commerce.

The regulation limits nonfinancial businesses to owning no more than 10 percent in banks or just four percent for banks holding shares with voting rights.

The government’s goal is to prevent big companies - mainly conglomerates - from owning banks and using them as their personal piggy banks. However, the Financial Services Commission has decided to ease the regulation governing internet banks.

The reform bill will allow IT companies to own more than 50 percent of the shares of the internet banks. Currently, KT owns eight percent of K Bank shares while Kakao owns 10 percent of Kakao Bank.

“Under the current regulation internet banks have no choice but to become affiliates of commercial banks, which means it wouldn’t be much different from the existing banks,” said a K Bank official.

“The easing of the regulation is necessary for [internet banks] to be innovative banks led by IT companies.”

However, the bill that could ease the regulation of internet banks is stuck on the floor of the National Assembly due to strong opposition from opposition party lawmakers.

The lawmakers argue that the regulation should remain as is to prevent private companies from exploiting access to customer deposits.

Saenuri Party lawmakers Kang Seok-jin and Kim Yong-tae tried to push the same reform bill at the National Assembly in June and July but had little success.

“Although there is a need [for easing the regulation] on the industrial point of view but there are still concerns in the market [of allowing private companies to use banks for personal purposes],” said Minjoo Party lawmaker Park Yong-jin, who is on the National Policy Committee.

“Although we will review [the reform proposal] it will be difficult to accept it with the same reform bill.”

People’s Party lawmaker Kim Kwan-young, who also is on the policy committee, said there is a need to carefully review the repercussions that could follow if the regulations on internet banking are eased.

If the reform bills remain unchanged, K Bank and Kakao Bank would have to launch under the current regulations. Although the banks will still be allowed to open, the limitations could hurt their ability to compete with existing commercial banks.

Since 1995, banks have been required to maintain Bank for International Settlements (BIS) ratios between the bank’s capital and risk assets, at eight percent. In order to maintain this rate the new banks would need substantial investments from parent companies KT and Kakao.

However, the regulation limiting the companies’ ownership stake will make it difficult for the internet banks to be funded.

“In order to settle in the market, there is a need to move aggressively preemptively but currently we’re worried that our customers will be left disappointed,” said an internet bank official.

“These are only 0.6 percent of the Korean banks’ total assets,” the FSC official said. “Under such circumstances, arguing that allowing the companies to own more than 50 percent of the shares would damage the core foundation of the regulations limiting the access of private companies on banks is an excessive interpretation.”

Oh Jeong-keun, a professor of IT finance at Konkuk University, said he expected the reform bill to easily pass the National Assembly as it was only exclusive to the cases of internet banks but the unexpected opposition from the lawmakers was a surprise.

“The reforming of the regulations is necessary in order to prevent even internet banks becoming banks without an owner,” Oh said.

Moon Jong-jin, a professor of business management at Myongji University, said the lawmakers should first allow the regulation to stand and regulate only if there is a problem.

“The passing of the reform bill within this year is important when you consider the economic effects, including creating jobs,” Moon said.