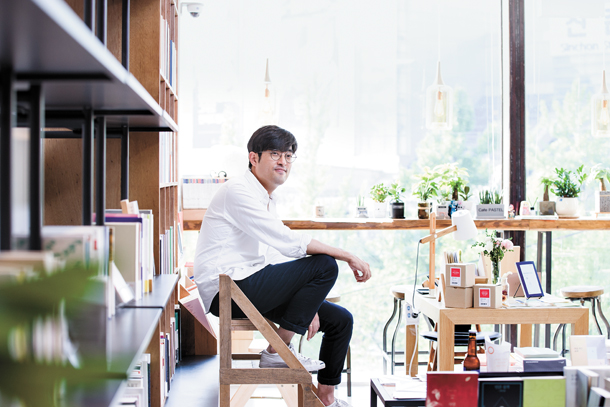 Poet Yoo Hee-kyung’s Wit n Cynical is one of a number of small yet exclusively designed bookshops that have gained recent recognition. [KWON HYUK-JAE]

For Lee Jin-gon, it has always been a dream to work in the travel industry. When he was certain that he may never be able to achieve that dream if he procrastinated any further, Lee resigned from his job at a game developing company, and opened a small travel-themed bookstore called Zimfree in Hongdae, western Seoul, that mainly sells independent travel-related publications.

When this reporter visited the bookstore last week, she spotted many handmade books, which are impossible to find in large, franchise bookstores. One of them included Suh Sang-hee’s “Siwa” that introduces a city in Egypt. Although not many pages fill up the book, each page demonstrated the author’s sincerity, as can be proven by the hand drawn designs and the handmade book binding.

“When I opened this store in December 2014, there weren’t many bookstores that dealt with independent publications,” Lee said. “And I wished to provide a space for those independent writers to sell their work, which is why I opened Zimfree. And I decided to focus on travel publications because I am highly fond of traveling. In fact, I have spent quite a lot of time traveling in the last 15 years.”

One unique aspect of Zimfree is that in addition to selling unique tour books to customers, the store also helps foreign tourists in Korea by providing free maps and keeping their luggage for a price ranging from 2,000 won ($1.50) to 9,000 won depending on the size of luggage and the duration.

Although selling less commercial publications at a small and trendy space was rare when Lee launched his business, quite a number of similar bookstores have started popping up nationwide. And people have started to recognize them over the last few months, as celebrities have become involved in the business.

One of these bookstores is singer-songwriter Yozoh’s Musa Bookstore, which launched last fall. Musa is translated in Korean as being safe and sound. Located in Jongno District, central Seoul, the store’s motto is to go by each day safely and soundly.

Another more recently opened bookshop is entertainer Ro Hong-chul’s Chuldnbooks, which opened late last month. The celebrity became interested in reading classic novels after hosting a weekend radio program based on classics. Ro wanted to run a local bookstore that sold independent publications, and the wish was fulfilled when Munhak Dongne Publishing Group approached the celebrity to sell its popular classics.

The 37-year-old’s store is stocked with various types of publications, including independent books and those recommended by fellow celebrities such as comedian-entertainer Kim Je-dong and anchor-turned-author Sohn Mi-na, who are known to be avid readers.

The bookshop, which is located in Yongsan District, central Seoul, is opened mostly on weekends when Ro is free from other obligations. The celebrity announces the times he is available through his Twitter in advance.

Another bookstore operated by a celebrity is Wit n Cynical, run by poet Yoo Hee-kyung.

Yoo, who is known as the 2008 winner of Chosun Ilbo’s annual literary contest, opened the small bookstore that specifically sells poetry in early June. After working as an editor for a publishing company, Yoo decided to practice the ideas that he had about poems by opening the store, and it has been generally well-received.

Considering that Yoo is a poem expert and that he hosts a poem recitation by inviting fellow poets, the bookshop has been a success so far. Located in Sinchon, western Seoul, many young students from nearby colleges such as Yonsei and Sogang universities often hang out at the store.

“Although this could be because the shop only recently opened, approximately 1,500 to 2,000 volumes are sold each month,” said Yoo, meaning that average monthly sales amount to 15 million won ($13,400) considering that each volume costs between 7,000 to 8,000 won.

Yoo is like a curator in his shop in that he helps those customers who are overwhelmed by poetry select the right one for his or her taste.

“One third of the customers believe that they don’t know much about poems, and therefore, my biggest role is to recommend several options and help them pick out one.”

Running a uniquely designed bookstore in a modest space has become a trend nowadays, although the number of bookstores nationwide has decreased from 1,625 in 2013 to 1,559 in 2015, according to the Korea Federation of Bookstore Association.

“[The app] was recommended with 70 local bookshops by users [at the beginning of the service], but that number increased to 150,” explained Nam. Along with the rise in stores, unique bookshops have been marked on the app’s map, such as a queer bookstore.

Part of the reason that contributed to the popularity of these bookshops is a group of people that wish to read different and less commercial publications, according to the poet Yoo. In other words, young people who wish to identify themselves by the books they read have propelled the launch of these small independent shops.

Reasons for the Increase in Small Bookstores

Opening such unique bookshops is popular among those who put more weight on controlling their time and mental stress over gaining financial ability, according to the former vice-president of Cheil Worldwide, the advertising arm of Samsung Group.

“The number of young people who wish to control their time and mental state more than the financial ability has increased, and organizing a bookstore stocked with their favorite books doesn’t require much professional knowledge,” Choi In-a explained about the recent boom in private bookshops.

“Although solely running a bookshop may not be enough to make up for daily expenses, the amount of income from selling publications is pretty steady, and therefore, the business will be appropriate for those whose personality fits into that [steady] characteristic.”

Although more and more small bookshops are appearing across the nation, the economic prospect of their business is not necessarily bright. Those who are already financially stable without the profit earned from selling books such as Choi and Ro may be different, but there are many other small bookshops that have difficulty that make ends meet.

Poet Yoo said that he feels completely empty after seeing the result of the year-end tax adjustment.

“Although the popularity of small bookshops will not suddenly disappear, how the industry will turn out in the long term remains unknown.”

The owner of Your-Mind also added his voice. “It is difficult to run a bookstore without hosting cultural events,” meaning that solely selling books is not enough. 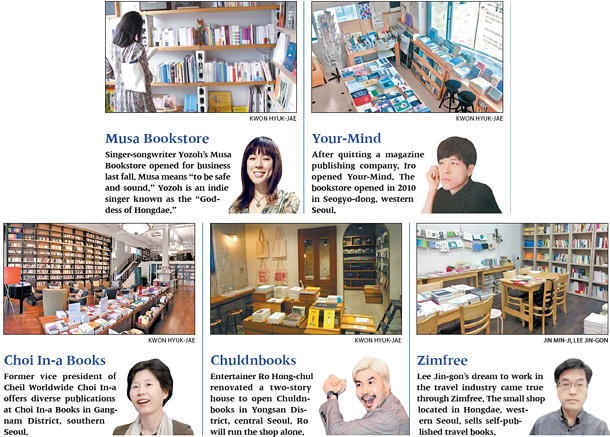