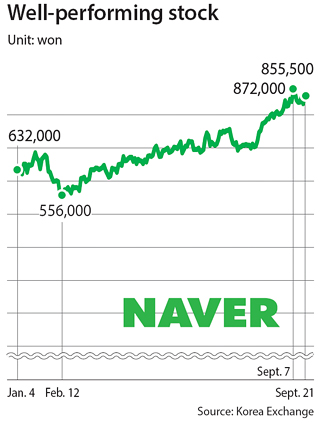 Shares of Naver, operator of the country’s most widely used search engine, have been doing well this year thanks to its messaging app subsidiary Line, which went public in Japan and the United States in July.

The shares began to steadily recover afterward and have been experiencing sharp growth since August after the public listing of Line in the Japanese and U.S. stock markets in July.

On Sept. 7, Naver shares reached an all-time high of 872,000 won. Aside from Line, revenue generated from the tech company’s mobile advertising business is another attractive factor for investors. As the No. 1 search engine in Korea, Naver is accessed by most Korean smartphone users as a source of information.

“The company expanded its mobile sector this year, and we are expecting this will pull up its advertising sales to approximately 2.4 trillion won this year, a 23 percent increase year-on-year,” said Kim So-hye, a researcher at Hanwha Investment and Securities.

“Naver currently takes up over 70 percent of domestic mobile searches, and its monthly count of page views are constantly on the rise,” said Lee Sung-bin at Kyobo Securities.

He added that Naver would be the biggest gainer in the domestic mobile advertising market, which is currently worth 1.5 trillion won, 15 percent more than a year ago.

Some market analysts, though, have expressed concern that Naver’s shares might have been overevaluated, raising the possibility of a price bubble from Line’s public listing. The search engine operator on Wednesday ranked fifth among Kospi stocks with a market capitalization of 28.1 trillion won.

On the possibility of Naver’s stock price rising even further, Jung Ho-yoon at Eugene Investment and Securities said, “Investors’ expectations on the company’s future growth are already reflected in its current stock price. Therefore, unless there is to be additional growth unpredicted by the market, a further increase will be unlikely.”

In fact, Naver shares have fallen from their Sept. 7 peak.

The question remains whether the stock can see more uplift. The overall opinion of market analysts is that it won’t hurt to keep Naver shares until the end of the year on the basis that during the year’s second half, there is high possibility that investors will be more cautious amid speculation on the U.S. Federal Reserve’s rate hike.

When that happens, investors will increase purchases of low-risk large-cap stocks like Naver.

The tech company’s stock price next year will depend on Line’s performance during the remainder of this year.

“If expectations for Line are unmet this semester, expected results for Naver’s 2017 will naturally go down as well,” said Gong at Shinhan Investment.