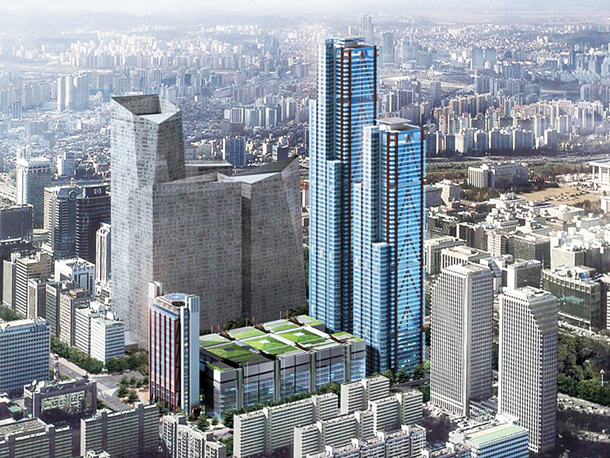 A computer-generated rendering of Parc1 in Yeouido, western Seoul. The complex will consist of two office buildings, a hotel and a retail space in the center by Hyundai Department Store that will be the largest department store in Seoul. [HYUNDAI DEPARTMENT STORE]

Hyundai Department Store has thrown the gauntlet down in the competitive retail industry, announcing an ambitious project to open Seoul’s largest department store by 2020.

The retail giant said Wednesday that it has been selected to operate a department store in the commercial district of Parc1, an unsightly space that has been left vacant for six years in Yeouido, western Seoul. The district will also include two office buildings and a hotel.

With seven floors below ground and nine floors above, the total floor area of the shopping complex will measure 89,100 square meters (959,064 square feet), making it the biggest department store in Seoul.

“Our plan is to make the Parc1 branch a major landmark of Korea and a ‘flagship store’ for Hyundai Department Store that will demonstrate our company’s know-how in creating a retail complex,” he said.

Construction of Parc1 initially began in 2007 with an expected completion date of 2012.

But in 2010, the work stopped after its developer, Y22 Project Financing Investment, was embroiled in a dispute with the landowner, the Unification Church, over land use rights. The Supreme Court in 2014 ruled in favor of the developer, setting into motion a reboot of the project.

Posco E&C is expected to resume construction work in November.

Situated in the center of Yeouido, Parc1 has long been considered one of the most profitable commercial sites yet to be developed. Not only is it close to several expressways, it is also on the routes of 40 bus lines that run through Seoul, Incheon and Gyeonggi and has direct access to Yeouinaru Station on subway line No. 5.

While Yeouido is known for its financial district, the island is also surrounded by residential areas including Yeongdeungpo District and Dongjak District to the south, making it a prime location for a commercial space.

The total amount of residents living within 5 kilometers (3.1 miles) of Parc1 is estimated to be 1.5 million people.

Hyundai Department Store plans to build its Parc1 branch in the layout of a mall with open spaces and natural lighting, a recent trend among domestic retail companies.

“We will focus every asset and buying power we have to make this project a success,” a Hyundai Department Store spokesman said. “Our aim is to make the venue even trendier than our most recently-opened branch in Pangyo.”

The Parc1 location will be Hyundai’s 16th department store in Korea and eighth in Seoul.