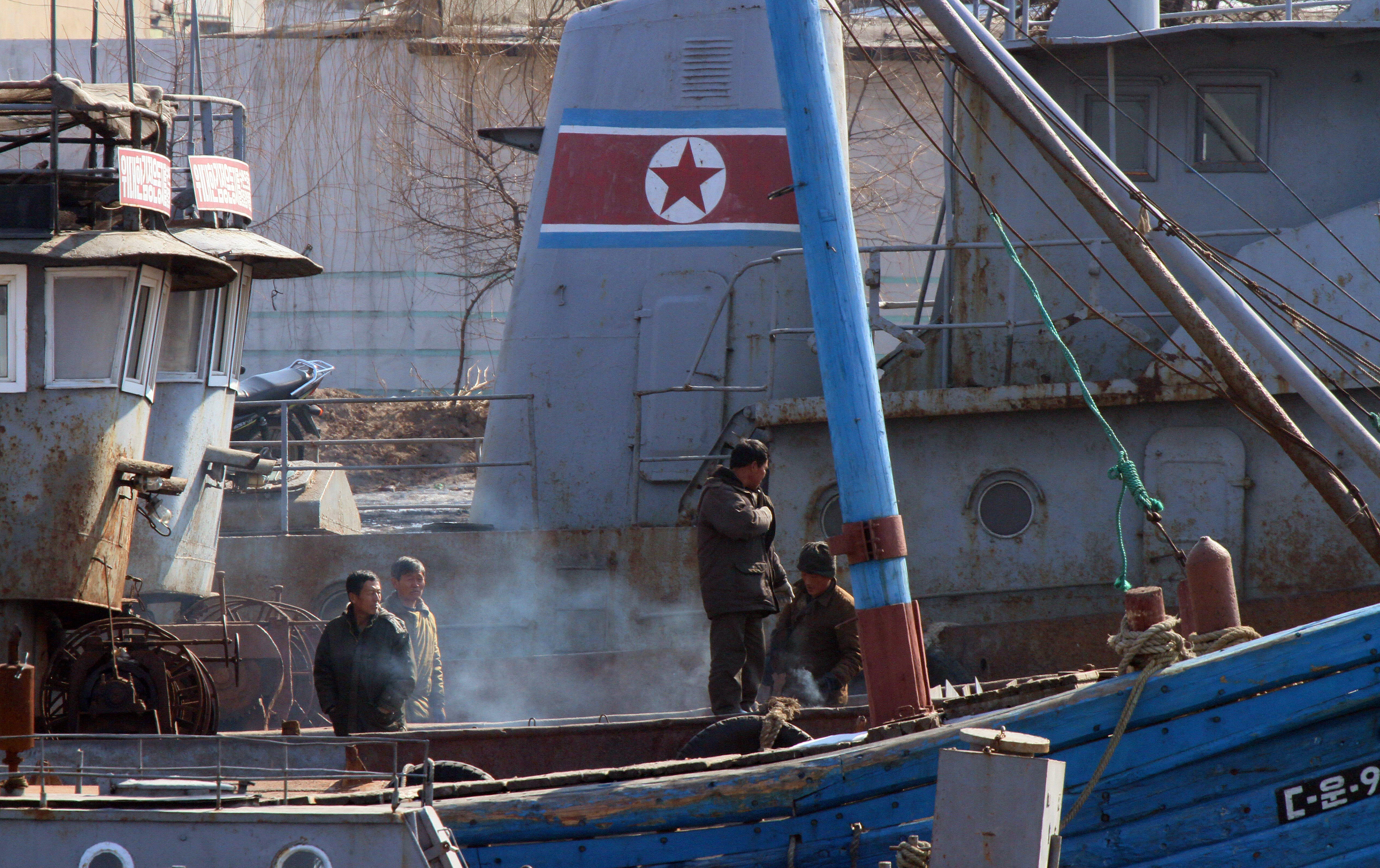 North Koreans work on a boat at a dockyard in Sinuiju, North Korea, as seen from Dandong in northeastern China’s Liaoning province, in February. [AP/NEWSIS]

Lately, security is the focus of discussions. It is only fair as North Korea is accelerating its nuclear program. However, the mentioned options of independent nuclear armament and reassignment of strategic nuclear weapons are unrealistic. If Donald Trump is elected president, the United States may allow Korea’s nuclear armament, but what will we do if the price to pay is withdrawal of the United States Forces Korea (USFK)?

Also, American specialists say that although strategic nuclear weapons belonging to the United States have reached than 7,000 at one point, now most of them have been scrapped. They are mostly deployed in Europe and few can be reassigned to Korea. The remaining ones are mostly B61 nuclear bombs that are dropped from aircraft, and they can be promptly used in case of an emergency in Korea.

Desirable North Korean policy should aim at the normalization of inter-Korean relations and reunification. One of the reasons to enhance security is to induce North Korea not to make a wrong decision and pursue normalization. The purpose of sanctions or talks is the same. However, it is doubtful Kim Jong-un would engage in sincere talks if we give up sanctions and resume talks at this stage.

So there is now no other option than sanctions. But unless the sanctions are upgraded, the possibility that they will have the intended effect is low. The North Korea-China trade statistics are proof. Earlier this year, the UN Security Council sanctions banned North Korea’s mineral exports such as anthracite. Anthracite is the biggest export of North Korea, more than 40 percent of it goes to China.

According to research on Chinese companies trading with North Korea, more than 70 percent of the North Korean exporters are affiliated with the military or the Workers Party. Their exports are not for the livelihood of the people. If the sanctions were effective, the anthracite export should have been decreased by more than 70 percent. However, from April, when China joined the sanctions, to July, North Korea’s anthracite export fell a mere 10 percent compared to the same period in the previous month. In April, exports decreased 20 percent, but in July, they fell just one percent, almost back to the normal level.

In response to the fifth nuclear test, the UN Security Council is discussing additional sanctions. But any sanctions that don’t reflect China’s will and capacity cannot be effective. Therefore, it is important to plan realistic, working sanctions and prepare a strategy to encourage China’s participation.

First of all, the priority of sanctions needs to be set. Currently, it is considered to exclude minerals, clothes and North Korean workers abroad.

But it is doubtful China and Russia would embrace the plan. Even if they accept it, exceptions may be made, and when corruption is added, sanctions are likely to be useless. Therefore, rather than increasing the items to be sanctioned, it is more effective to target the most important items and reinforce the sanctions. In Iran, controlling petroleum exports was effective.

The priority is to ban all North Korean mineral imports. For the exports of the same dollar amount, North Korea has several times more profit in minerals export than clothes, the second largest export category. Sanctions on minerals exports would effectively reduce the North Korean regime’s foreign currency income. A complete ban means leaving no exceptions. Until now, China could continue to import anthracite from North Korea as the Chinese government continued to label their companies “working for the livelihood of the North Koreans.” The documentation system makes the UN sanctions a joke. The exception must be eliminated.

To encourage China’s participation, we need to communicate with them more deeply. China is reluctant to actively participate in sanctions because of the possibility of North Korea’s collapse. The Chinese government and specialists seem to believe that the ulterior motive of Korea and U.S.-led sanctions is to bring down North Korea. Unless Seoul clears the suspicion and convinces China that Korea’s reunification plan is a peaceful one, China would only pretend to impose sanctions no matter how strong the Security Council resolution may be.

We also need to have a keen eye to see beyond the sanctions. The North Korean policy needs to make use of Korea’s merits, moral and economic superiority. North Korea cannot match Korea’s democracy and humanitarianism. Therefore, Korea needs to make civilian-level humanitarian assistance to help the flood damage recovery in Hanggyeong Province. A country that loses moral superiority would lose the ability to accomplish reunification.


*The author is a professor of economics at Seoul National University.