The number of fish farms in the country has fallen compared to last year, but output has increased significantly, an improvement the government says is largely due to the rising price of raw fish.

“The number of fish farmers dropped because many small-size farms closed down as more business owners are getting older and competition in the local market is getting fiercer,” said Kim Jin, a director at the statistics agency. “Output, on the other hand, increased compared to the past as the price of certain types of fish such as red seabream rose significantly.” 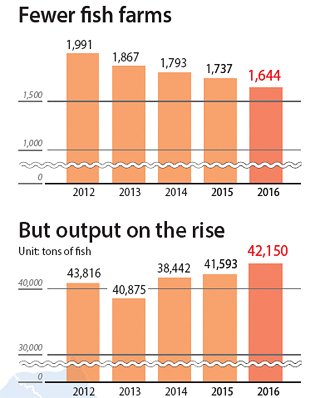 Fish farming continues to be a male-dominated industry in Korea, with 81.8 percent of farmers male and 18.2 percent female. The statistics agency said there were more men in the industry because of the large amount of manpower involved.

By type, flatfish was the most cultivated during the first half of this year. Local fishermen raised 22,174 tons of flatfish, followed by 10,130 tons of rockfish and 4,553 tons of mullet.

The amount of feed given to fish rose 13.1 percent from last year to 247,353 tons as more fishermen farmed mid- to large-size fish.