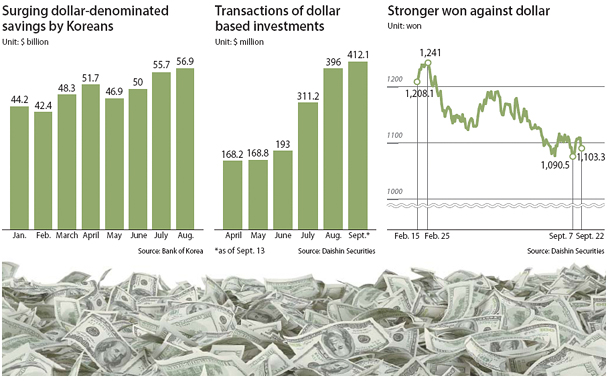 With the won strengthening against the greenback, investors are piling into dollar-based investments ranging from dollar-denominated savings accounts to repurchase agreements and dollar exchange-traded funds and equity-linked securities.

The moves are largely based on an assumption that the strong won allows for cheaper dollar purchases now and exchange gains later when the dollar appreciates against the won again.

Many analysts project that an interest rate hike by the U.S. Federal Reserve will push up the value of the dollar against the won.

The Fed postponed its plan to raise rates on Wednesday after a series of mixed economic reports that tamped down market confidence.

The Bank of Korea said last week that dollar-denominated savings by local residents reached a record high of $56.9 billion in August, an increase of $1.2 billion from the previous month.

The figure includes foreign currency deposits held by Koreans, expatriates and foreign corporations that have been in the country for at least six months, but the central bank noted that individual investors drove the steep rise in dollar-denominated savings.

Such a flight to the dollar has been spurred by the Korean won strengthening against the dollar, a boost that started taking shape entering June as the pace of U.S. economic recovery remained slow. Korea, on the other hand, saw steady growth, a factor that prompted Standard & Poor’s to raise the country’s credit rating in August.

The won dipped below the psychologically important level of 1,100 won per dollar on Aug. 10 for the first time in 13 months, though it climbed over that level again in September.

Korea’s won continued to strengthen, closing at 1,103.3 on the dollar Thursday, down 16.8 won from the previous day.

The amount put into dollar-denominated repurchase agreements at Daishin Securities went from $82.96 million at the end of June to $240 million as of Sept. 13, the latest data available. The funds placed in dollar-linked bonds also rose from $46.6 million in June to $56.8 million this month.

Mirae Asset Securities saw the boost, too, with the volume of dollar-based investment increasing from $43 million at the beginning of the year to $260 million by the end of August.

As the dollar is expected to be on track to strengthen with the anticipated interest rate hike at the end of the year, the demand for dollar assets will likely keep growing in the coming months.