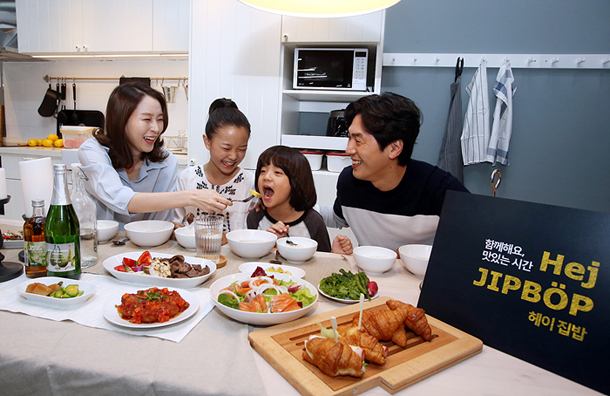 Models from Ikea in the “Share Delicious Time Together” campaign, launching next Tuesday at Times Square in Yeongdeungpo District, southwestern Seoul. [IKEA]

“We have 700 articles in the cooking and eating area, completely new for the Korean market,” Andre Schmidtgall, country retail manager at Ikea Korea, said Thursday during a press briefing at the Times Square shopping mall in Yeongdeungpo District, southwestern Seoul.

Although Ikea entered the Korean market in 2014, sales of kitchenware such as dishes and cups from the Swedish home decor maker were not permitted due to legal restrictions related to product labeling. After the Korea Food and Drug Administration eased up on the restrictions this year, the company was able to bring in the full set of its items to Korea.

Ikea’s store in Gwangmyeong, Gyeonggi, includes a 1,000-square-meter (10, 764 square foot) space devoted to kitchen products and began sales on Sept. 9. The new promotional campaign for the product line begins next Tuesday and runs through Nov. 12 at Times Square. The mall will include a venue set up with an Ikea kitchen and allow visitors to cook food there.

Even as the company rolls out its new products here, Ikea is still working on cleaning up its stained image in Korea after delaying a recall of drawer chests that killed several children after tipping over.

“We have tested drawer chest products and suspended another 15 models a day before yesterday,” Schmidtgall said.

The company already halted sales of 15 drawers including the MALM drawer on Sept. 9, following recall orders from the Korean Agency for Technology and Standards under the Ministry of Trade, Industry and Energy.

“We put safety and security as the utmost priority,” Schmidtgall said. “Tipping risk is an industry-wide problem.”

According to Ikea, particular models of its drawer chests are banned from sale only in three countries - the United States, Canada and Korea - and in other markets, the article is sold with recommendations that the drawer be anchored to the wall for safety.

The company is working on a second Korea branch in Goyang, Gyeonggi, set to open by the latter half of next year. It plans to build up to six stores in Korea by 2020. Likely locations include the Seoul metropolitan area, Daejeon and Chungcheong in the country’s central region, and Busan in the southern region.