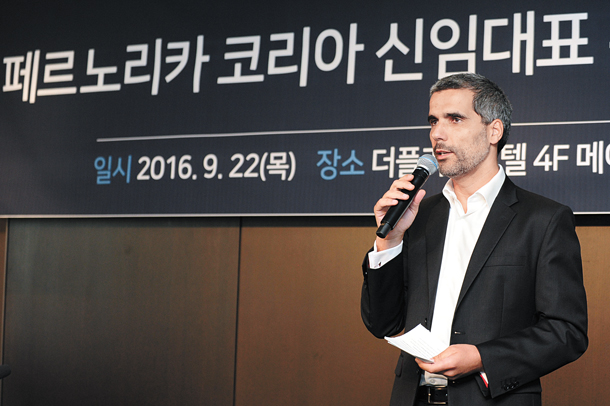 Pernod Ricard Korea wants to bring up dwindling sales of its alcoholic drinks, according to Jean Touboul, new CEO for the local unit of the French wine and spirits distributor.

Touboul took office this month after wrapping up his work as CEO in Taiwan. The company distributes many well-known Scotch whiskys such as Ballantine’s and Chivas Regal. It also distributes Absolut Vodka and Mumm and Perrier-Jouet Champagnes.

“The company is at an important crossroad,” Touboul said Thursday. “And our ambition is clear. We need to take the second leap so that we can take the leadership in the market in Korea.”

Noting the local unit has struggled with sales of its beverages, including local whisky label Imperial, Touboul said his short-term goal is to turn the tide toward growth. Local brand Imperial was No. 2 in the whisky market, but sales slipped behind Golden Blue’s early this year.

Touboul said changing the tide is “not an option but a must,” as a majority of the company’s sales are from whisky.

“I’m confident [about making the company see sales growth] because we have a fantastic portfolio [of drinks] and this is the best in the industry,” said Touboul. “As a new CEO, my mission is to make the company become more efficient and stronger.”