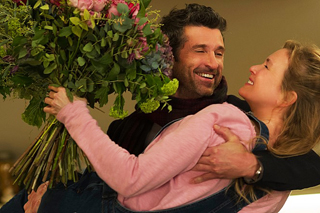 She might have gotten older, but her dilemma between two men continues.

After five years of sad nights following her breakup with Mark Darcy, played by Colin Firth, Bridget Jones, played by Renee Zellweger, falls in love with the charming CEO of an online matching company, Jack, played by Patrick Dempsey. Just when she lies in bed savoring the smooth love life she’s having, she finds out that she is pregnant. The problem is, she is unsure who the father is. Is it Mark, after their night together at a party or Jack, her boyfriend?

Following “Bridget Jones’s Diary” in 2001 and “Bridget Jones: The Edge of Reason” in 2004, this is the third installment of the series, making a grand comeback after a 12-year gap. Those who laughed along with Bridget in the previous films are welcome again to sit back and relax with the (maybe) more mature Bridget.

The director of the first movie in the series, Sharon Maguire, is directing this year’s movie, adding to the nostalgia both the audience and actors are feeling with the joyful return of the film.

Jacob, played by Asa Butterfield, walks into a mysterious world where everything is different from the world we live in. As the audience follows in the footsteps of Jacob, they will find themselves falling deeper and deeper into the magical world of Miss Peregrine, played by Eva Green.

The world at first seems quite tranquil with innocent children running around green yards, but these kids hold extraordinary powers that no one can easily understand. Ousted from society due to their peculiarities, the children live under the protection of Miss Peregrine. Will Jacob stay to save his new friends from their enemies?

The film is based on a book by Ransom Riggs, “Miss Peregrine’s Home for Peculiar Children”, which spent more than two years on the New York Times best sellers list. It was also placed on the “100 Young Adult Books to Read in a Lifetime” list by Amazon. 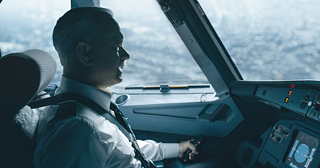 We get on planes for many reasons - a few days away from our mundane lives, to learn of a new world, to visit loved ones, after a goodbye from a beloved friend or family member, and countless other reasons. Whatever it may be, due to the heights we soar to, it is not easy to shake off the wish for a safe flight with each footstep toward the gate.

“Sully” confronts one of the greatest fears that we hold. A jet carrying 155 souls, including the pilot Sully (Tom Hanks), experience a dual engine loss at a lower altitude than any other jet in history, 580 meters (2,800 feet).

Determined to save the lives of his passengers, Sully heroically lands the jet on the Hudson River, only to be questioned by the media and public ready to label him as a “caped hero” or a “troubled pilot”.

Holding touching moments as well as dramatic scenes, the film, which is based on a true story, is expected to draw a wide range of viewers, from action lovers to those who enjoy thought-provoking films.

“Breathing Underwater” features the strongest women on both land and sea - haenyeo (female divers). These women hold their breath throughout their dive to collect seaweed and other marine life. An experienced haenyeo can hold her breath up to three minutes under water, coming back to the surface with a handful of seafood. They dive to earn a living, but some end up losing their lives in the waters.

Some have seen their friends never swim back up, and some have had no choice but to dive into the waters that took the lives of their daughters.

Taking seven years to produce, the documentary film looks at the everyday life of haenyeo, from their proudest moments to their saddest times. It also fills the screen with the clear blue waters of one of the most beautiful places in Korea, Jeju Island.

The phone rings as usual. She picks it up.

Someone on the other end tells her that her beloved grandmother tried to commit suicide.

So-hyun was raised by her grandmother since she was little. It was her grandma who stood by her side for her graduation photos; she was always there to protect the young girl. But as So-hyun grew bigger and bigger, grandma got smaller and smaller, and the time came when So-hyun had to carry on with her life on her own.

The phone call however brings So-hyun back to her old home to be by grandma’s side, now as a grown-up woman.

“I’m going to make a movie about our life together, so you can’t die until you watch it, alright grandma?”

Understanding philosophy may seem like an ultimate challenge to some, but that may not be the case after watching the French film “Things to Come”.

Nathalie, played by Isabelle Huppert, lives an ordinary life teaching philosophy at a high school in Paris, as a wife, the mother of two children and the daughter of an old woman.Life, however, hands her much to think about when her children separate from their parents, her mother passes away, and her husband finds himself a new woman.

Paris is usually imagined as a dreamy city with love in the air. The film is expected to show the audience not only the magical air the city holds, but also the burden of life everyone carries around on their shoulders. 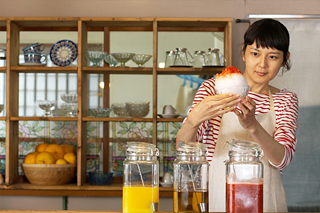 There Is No Lid on the Sea (All)

For those who are sad to see the summer slip away, here’s a tranquil summer story to bring back the warmth.

Based on the popular Japanese novel “There Is No Lid on the Sea” by Yoshimoto Banana, readers are looking forward to the realization of scenes from the book, and others are expected to be mesmerized by the dreamlike mood the story creates.

Mari, played by Kikuchi Akiko, is overwhelmed by the bustling city life and moves to the seaside to open up a kakigori (Japanese shaved ice dessert) shop. She happens to live with Hajime, played by Azusa Mine, who holds wounds deep down in her heart from her past burn injury and the loss of her beloved grandmother.

The two girls slowly wash off their bruises by the sea, becoming good friends who calmly stand by each other’s side.

A little boy, Pete, played by Oakes Fegley, is found in a deep forest, having lived for six years with no one else but a dragon. As he is exposed to the world, people come chasing after the dragon, and Pete falls into a dilemma whether to leave his extraordinary friend to keep him safe, or to stay with him.

Families will love the pure friendship between the dragon and the young boy. It is interesting how the film depicts the mythical creature, which is accepted as a sign of luck in Asian cultures but a scary creature in the western world.

The peaceful town of Rose Creek is taken over by the gang of industrialist Bartholomew Bogue, played by Peter Sarsgaard. The group’s merciless exploitation gives the townspeople no choice but to leave their home, among whom Emma Cullen, played by Haley Bennett, ends up watching her innocent husband get slaughtered. She hires a bounty hunter, Sam Chisolm (Denzel Washington), for revenge, suggesting her whole fortune in return.

“The Magnificent Seven” is gaining much attention, with many looking forward to the plot in which a period film is blended with director Antoine Fuqua’s imagination.

Korean actor Lee Byung-hun is getting the eye, playing a good-willed character for his first time in a Hollywood film. He made his Hollywood debut in 2009, appearing in “G.I. Joe: The Rise of Cobra.”