A new look for the classic zombie movie

A new look for the classic zombie movie 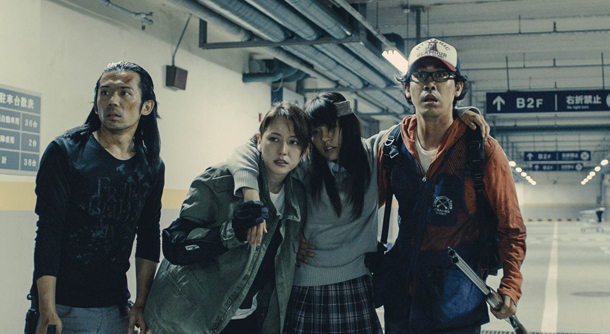 The latest Japanese zombie thriller “I’m a Hero” follows the journey of Hideo (Oizumi Yo), far right, and Hiromi (Kasumi Arimura), second to right, and their struggle to fight off deadly zombies. [BIG FILM MOVIE]

Most moviegoers are familiar with zombies that are senseless creatures that growl and crave eating human flesh while moving at a walking pace. For those who are used to this stereotypical caricature, they may be surprised with the ones that appear in the new Japanese zombie flick “I’m A Hero,” which hit local theaters on Wednesday.

The zombies from director Shinsuke Sato’s latest cartoon-based film are different in many ways - they have the ability to observe human behavior before attacking, they maintain habits they had before turning into the undead and speak in full sentences instead of merely growling. Additionally, Sato’s decision to give the monsters a weightier role, even more so than some of the survivors, also sets this movie apart from ordinary zombie thrillers.

The zombies in the latest Japanese action blockbuster are also more grotesque than what viewers have recently seen on screen. For example, one of the walking dead, who used to be a high jumper before being bitten, has half of his head squashed after he continuously tries to keep practicing the high jump, only to keep landing on his head.

The movie focuses on the wannabe hero Hideo (Oizumi Yo), an assistant animator who lacks financial stability and a half-turned high school zombie named Hiromi (Kasumi Arimura) that Hideo fanatically tries to protect, as if to become the hero that he was never able to become in reality.

The movie unfolds as the deadly yet mysterious ZQN virus spreads across the nation. Once Hideo’s girlfriend and co-workers get infected by the virus, he heads in the direction of Mt. Fuji, which he heard was free of zombies, with a hunting rifle that he was never bold enough to use before the outbreak of the virus. On the way, he finds Hiromi, and the two head off on a journey, saving and protecting each other.

Usually, zombie films come to an end when the leading characters reach their destinations safely. In this Japanese flick, however, a whole new story begins when Hideo and Hiromi meet a bunch of survivors on the journey who lead the pair to the rooftop of a building, where zombies can’t reach, and meet others that have lived.

Among the survivors, there is a dictator and a few others that yearn for that power. The internal power struggle puts the survivors in a dangerous position, ultimately leading to only a handful surviving.

For zombie lovers, it is unavoidable to make comparisons with Korea’s first zombie blockbuster “Train to Busan,” which broke the 10 million ticket sales milestone.

Although both movies deal with zombies, the two focus on different aspects. While the Korean movie is an entertaining film focusing on family with a touch of political criticism, this Japanese flick is a classic zombie thriller that vividly shows how humans mercilessly kill the undead and vice versa, making it a good choice for viewers who wish to watch a fun and violent movie.