The struggle between two evils : ‘Asura’ is the tale of an unwilling villain stuck in a circle of violence

The struggle between two evils : ‘Asura’ is the tale of an unwilling villain stuck in a circle of violence 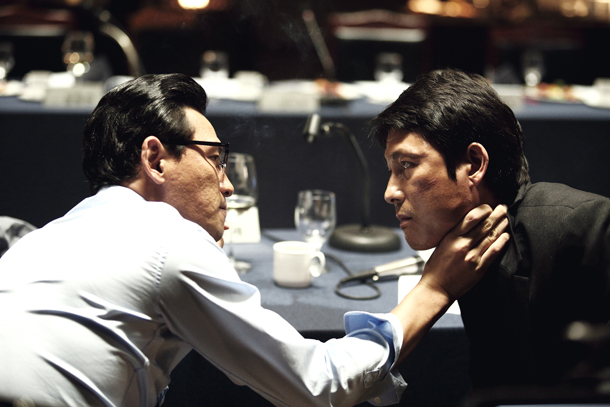 In the upcoming crime action thriller “Asura: The City of Madness,” the evil mayor (Hwang Jung-min), left, is willing to do anything to get things done his way through his “human-pet” Han Do-kyung (Jung Woo-sung), right. [CJ E&M]

People usually watch action thrillers filled with anticipation for how breathtaking and realistic the action scenes will be. In the upcoming “Asura: The City of Madness,” however, director Kim Sung-soo chose to focus more on characters’ emotional outbursts that are derived from frustrations over not being able to break away from the circle of violence they voluntarily stepped in to in order to satisfy their own greed.

The movie, which has long been garnering public interest for starring high profile actors such as Jung Woo-sung (“The Divine Move”), Hwang Jung-min (“New World”) and Kwak Do-won (“The Wailing”), was unveiled at a press preview held on Wednesday at the CGV in Wangsimni, eastern Seoul. The filmmaker along with the film’s five stars, including Ju Ji-hoon and Jung Man-sik attended the event to add detail to the film.

“This was the first time I wrote a screenplay for a film since ‘The Warriors’ (2001),” said Kim. “I have been planning to put this script on screen for a long time, and worked on it with Jung Woo-sung, who promised to take part in this movie even before reading the script, in mind,” due to the pair’s longtime friendship that formed while filming the 1997 action thriller “Beat,” helmed by Kim and starring Jung.

“I wanted to portray a petty villain [at the top of the violence hierarchy] that collapses with a single blow,” added Kim and explained the motivation behind the movie. “I have always wondered for what reason bad guys sacrifice themselves for their boss. I wished to draw a scapegoat in the violent hell that bites off his boss after being pushed out to the edge of a cliff.” 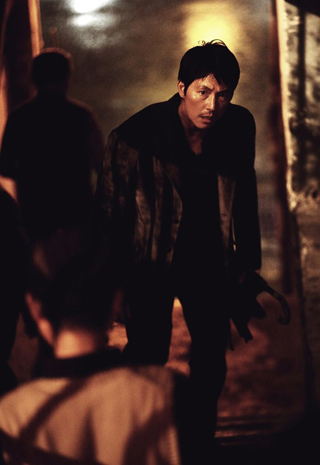 Han Do-kyung continuously struggles over whether to side with the evil mayor or a prosecutor that uses all means necessary including violence to force Han to get evidence of the mayor’s illegal activities.

Unlike usual action noirs, where good and bad guys co-exist, “Asura” exclusively features antiheroes that fall into the victims of their greed. At the top of the hierarchy is the two-faced mayor of a fictional city of Annam Park Sung-bae (Hwang) that orders his “human-pets” to do anything for his benefit.

At the heart of the story is the struggle of the mayor’s human-pet, a corrupted cop Han Do-kyung (Jung), that agonizes on deciding who would be more dangerous to betray between the mayor and a prosecutor Kim Cha-in (Kwak) that physically forces Han to provide him with the evidence to put the mayor behind the bars.

Han’s struggle adds suspense throughout the film, as his decision on who he sides with remains unpredictable until the end.

“Han’s [biggest] desire is to stop the situation from escalating,” explained Jung at the press event. “I believed I should portray a struggling villain that expresses his frustration from being pressed from the bigger evil through [my] physical presence.”

At the peak of Han’s nerve-jangling emotion is also the film’s highlight, where the character recklessly and violently drives in rain to chase his opponent, leading to a catastrophic multiple car-crash.

“One of the most important scenes of this movie is when Han drives to chase another car after spiritual wreckage,” said the director. “We realized that a car chase scene in the rain has not been featured in foreign films.”

The crime-filled action movie, which contains lots of violent scenes and foul language, is rated R and is slated for release on Wednesday.