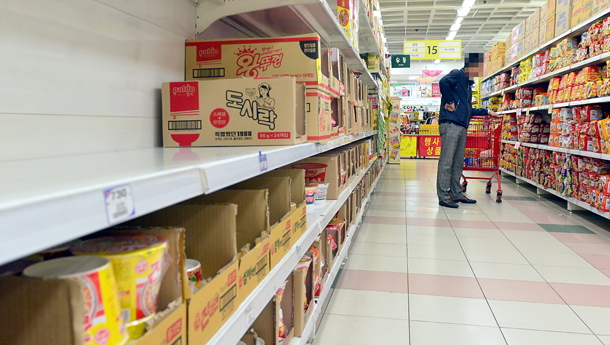 A resident of Gyeongju, North Gyeongsang, the epicenter of a number of major earthquakes in the past two weeks, is browsing a section of a supermarket that sells instant noodles on Thursday. In Korea noodles are considered a necessary and popular food to stock up on before natural or national disasters. [NEWSIS]

Rumors that stronger earthquakes may hit the North Gyeongsang city of Gyeongju in the next few days are spreading blind fear among residents despite the government and experts’ analyses that such conjectures are scientifically ungrounded.

“Three of my neighbors left the town and are headed to their relatives’ places in Seoul and Daegu,” said a 57-year-old resident of Gyeongju. “We’ve all heard that stronger earthquakes may be on the way, and I’d leave in a heartbeat, too, if not for the 60 cows on my farm.”

Gyeongju was struck by a 5.8-magnitude earthquake on Sept. 12, the strongest since 1978, which was preceded by a 5.1-magnitude foreshock and a 4.2-magnitude aftershock on the same day.

As of Thursday afternoon, Gyeongju, a Unesco World Heritage site, has experienced a total of 423 aftershocks, according to the Korea Meteorological Administration (KMA).

Yet rumors that larger quakes are on their way are shaking up residents. A chart written in English and Japanese that designates the dates and magnitudes of earthquakes in Korea, Japan and surrounding regions from June to early October went viral on social media this week.

“Not only does the chart correctly point out the dates and magnitudes of the quakes of Sept. 12 and Monday, it predicts more will be coming on Saturday,” a user commented. “I sure pray nothing bad happens.”

The discussions sparked online even asserted that the mysterious gas-like smell in Busan and Ulsan in July, and the photos of thousands of ants spotted moving along a shore in Busan, are signs of coming quakes.

“Employees here are quite worried after hearing rumors that stronger quakes may be on their way,” said a 31-year-old employee of a petrochemical complex in Ulju County, Ulsan, some 10 kilometers (6.2 miles) from Gyeongju. “If an earthquake disrupts the complex, a leakage of poisonous gas could kill people within seconds.”

Experts say such rumors do not have scientific ground.

“The most that geologists can predict is the possibility of any coming quakes in years,” said Yoon Seong-hyo, professor of earth sciences at Pusan National University. “For example, geologists of California published papers that said the possibility of earthquakes coming before 2020 is at 65 percent.”

He added, “So imagine how difficult it would be to predict the exact dates and magnitudes of earthquakes. As for the ants and gas smell in Busan, they don’t have much to do with the quakes. Ants move in colonies before and after monsoon seasons, and gases related to earthquakes are colorless and odorless.”

In analyzing the locations of the hundreds of aftershocks, the KMA concluded that the quakes are moving south-southwest.

“The aftershocks are expected to continue and the KMA does not know when they will cease completely,” said Yoo Yong-gyu, head of the Earthquake and Volcano Monitoring Division of the KMA. “The possibility that a quake stronger than the 5.8-magnitude earthquake will hit the region again is very low, but aftershocks of magnitudes 3.0 to 4.0 may occur.”