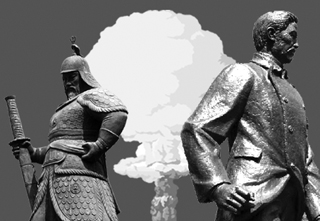 The situation has reached a critical point on the peninsula in the wake of a fifth nuclear test by the reclusive North Korea. We live in a land that is the most heavily-armed and perilous place since the turn of the century.

Peace on the Korean Peninsula is directly related to world peace. So is the North Korean nuclear problem. North Korea’s military technology and war capabilities, which have fast advanced amid helplessness and neglect by the international community, must be contained. But the problem is, how?

The conundrum seems impossible to untangle, but we must muster all possible seeds of hope before the worst becomes a reality. We must not give up efforts and hope until conditions for war become irreversible. Fortunately, we still have a chance since no countries recognize North Korea as a legitimate nuclear weapons state and we have not entered an imminent danger of nuclear conflict. The world also remains united in support of peace on the Korean Peninsula.

We must break out of the helpless skepticism of accepting a nuclear North Korean as inevitable and come up with inventive solutions to achieve denuclearization and peace on this land. We can hardly call ourselves sensible by suddenly talking of going nuclear in a tit-for-tat approach.

The self-indulgent theory of believing in the inevitable collapse of the Pyongyang regime and the merger of the two Koreas was debunked by the North’s recent staggering development in nuclear weapons capabilities.

Given our conditions — bound by the Non-Proliferation Treaty, alliance with the United States, war command in the U.S. hands, missile agreement with the U.S., trade-reliant economy and 100-percent reliance on uranium imports to run nuclear reactors — going nuclear is out of the question.

Skeptics of peace on the Korean Peninsula compare our situation with those of India, Israel and Pakistan. But there are more — South Africa, Taiwan, Iran, Argentina, Brazil, Ukraine and Kazakhstan who, either through international persuasion or willfully, have stopped, given up and dismantled their nuclear weapons.

We must study deep into these successful cases.

Then we need to ask ourselves if our determination and endeavors for denuclearization and peace had been as consistent and eager as the persistent nuclear ambition bred over three generations of leaders in the form of Kim Il-sung, Kim Jong-il and Kim Jong-un. The world would have naturally been less intent. But what about us? Over the last quarter of a century, we might have condoned North Korea to pursue its weapons program while the conservative and liberal camps wrangled with ideological disputes, entirely engrossed with their own political interests.

Today’s crisis stems not only from the conflict between the conservatives and liberals but also from a failure of national policy. We must somehow build bipartisan policy when it comes to the issue of denuclearization and peace.

What is imperative for us is to re-examine our policy on North Korea over the last quarter of century to draw lessons and redesign strategies to devise a master plan. We must go over the landmark deals – the armistice and Korea-U.S. mutual defense treaty in 1953, the inter-Korean denuclearization declaration in 1991, the Geneva Agreed Framework between Pyongyang and Washington in 1994, and the joint statement on denuclearization after the six-party talks on Sept. 19 2005 — to learn what procedures and details led to successful outcome through dialogue.

To achieve these goals, we must bring North Korea to the negotiation table, engage Washington and increase Seoul’s role. The security issues — nuclear disarmament and ultimate peace of the peninsula — hinge on these subtle considerations. The nuclear conundrum needs to be reasonably solved through Washington’s ultimate security guarantee and the enhanced role of Seoul.

North Korea’s nuclear problem is a crisis that we must and can solve. No other countries that experienced colonization in the 20th century have turned out better than us. We built ourselves to a global economic powerhouse from the rubble of the 1950-1953 war. Korean Inc. ranks first in key industries and technologies. In the pre-modern days, Korea somehow remained independent when all neighboring states came under the Chinese empire. We got back to our feet after numerous wars and invasions. We must not let down our ancestors.

We cannot send our future generations to the battlefield, their certain deathbed. Our biggest historical heroes — Joseon era Admiral Yi Sun-shin and independence fighter An Jung-geun — had said it was a humiliating crime to set a nation to war, and they blamed themselves for being guilty of the crime. What made them extraordinary heroes was their humble self-awareness. We cannot put our children in another war. We all must feel a sense of guilt to come up with wisdom to work towards the goal of making this land nuclear-free and perpetually peaceful.


*The author is a political science professor at Yonsei University.