Uniting the East and West

Uniting the East and West 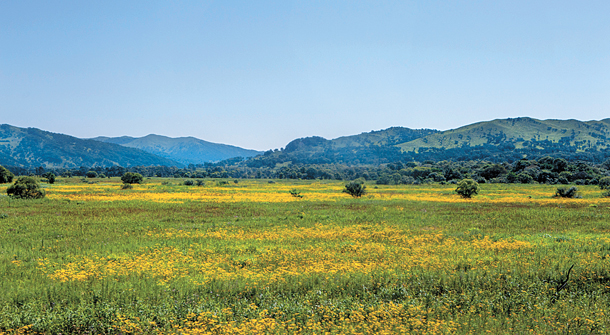 Yellow wildflowers cover a field near Khasan, a Russian city on the border with China. It looks like the scenery and terrain of Korea. [KWON HYUK-JAE]

The plain of Russia’s Maritime Province was immensely vast. Horizon after horizon spread in front of my eyes, and yellow and blue wildflowers were filling the plain. I was reminded of a verse from a poem by Do Jong-hwan, “Where have flowers bloomed but never trembled?” The blue sky was free from pollutions and the endless land was filled with wild flowers. They bloomed without a care and they were slowly moving with the wind, creating beautiful scenery under the bright sunlight.

This magnificent land was once inhabited by the Tungus, who shared the same blood with the Korean people, tens of thousands of years ago. It used to be the territory of Balhae and later ruled by the Jin dynasty of the Jurchen people. In 1860, the land was handed over to Russia through the Convention of Peking at the end of the Qing Empire.

The traces of the Tungus people, such as their facial features, lifestyle and architecture were nowhere to be found in Vladivostok and Khabarovsk. It took just 150 years for the land to be totally transformed into European cities. The traces of the East Asian people, who shared the same blood as Koreans, completely disappeared.

The land is just across the Tumen River, but one single treaty entirely reshaped it. When I was young, I used to feel touched whenever I heard the name of the Heukryong River in the movies featuring independence fighters. The river was also named by the Mongolian people as the Amur, as it was flowing so peacefully. And yet, it became a European territory that we can reach only after a long detour flight.

It probably takes two hours flying to reach Vladivostok from Seoul, but we had to fly toward the West Sea and then cross Manchuria in order to avoid North Korean airspace. I was uncomfortable to see the route, and then my heart became even more disturbed as I faced the blonde-hair Russian immigration authorities at the airport. As I saw the European culture in the city, I had to lament. Arabs live in the Middle East, Europeans live in Europe and Africans live in Africa. But why is this Far Eastern Asian city European? A treaty and national powers are significant. If there are people who want to learn the consequence of failed leadership and failed national identity, I advise them to visit the Maritime Province.

The members of the Peace Odyssey trip spent some time at the train station of Vladivostok. Patriot An Jung-geun must have stood on this platform before he headed to the Harbin station to assassinate Ito Hirobumi with a pistol in his hand. And when 170,000 Koreans were forced to relocate to the unfamiliar land of Central Asia, they must have boarded trains at this station.

Standing on the platform, I was mesmerized into some thoughts. I wondered if An had never wanted to avoid the destiny that he chose. If it were me, could I have boarded the train to Harbin without any hesitation? Country, life, destiny and the duty of time went through my mind.

At a seminar held at the Far Eastern Federal University in Vladivostok, we were embarrassed by a comment from a former adviser to the minister for the Development of the Russian Far East. “How come you do not try to improve and resolve inter-Korean relations on your own and ask other countries to do it for you?” he asked. He then ended his presentation by showing a photo. It was a selfie taken by South Korean gymnast Lee Eun-Ju with her North Korean competitor Hong Un-jong at the Rio Olympics. The photo was asking what the two governments are doing.

The Maritime Province of Russia has a history of having ruled by different people for years. The two Koreas, China, Russia and Japan should plant together the seed of peace and mutual prosperity in the region. We should transform the region by linking the Arctic route to China’s “One Belt, One Road” policy, by uniting the East and the West and by creating a new civilization. That is the destiny of this land and the challenge of our time. “Even those most beautiful flowers, all trembled as they blossomed, and as they shook, stalks grew firm,” Do wrote in his poem. The journey of the Peace Odyssey probably wanted to tell us about the future of this land.


*The author is a professor of economics at Sogang University.