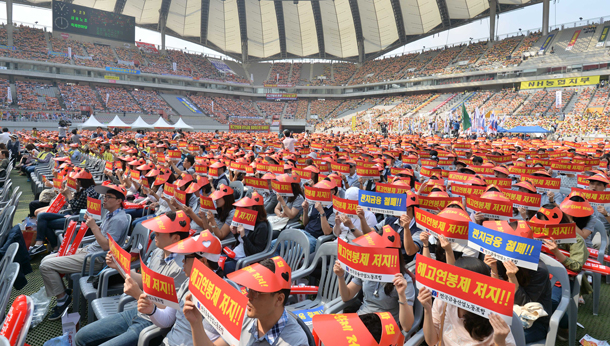 Members of the Korean Financial Industry Union, an umbrella labor union of Korean banks, participate in a general strike on Friday at the Seoul World Cup Stadium in Mapo District, western Seoul. [NEWSIS]

Union members of the country’s major banks launched a daylong strike on Friday to protest the government’s initiative to expand a merit-based salary program.

Held at World Cup Stadium in western Seoul, the strike had a lower turnout than was expected, sparing bank branches any major disturbance. The Korean Financial Industry Union had expected almost all of its 100,000 members to show up for the sit-in protest, but it later said only about 50,000 gathered, while the Financial Supervisory Service (FSS), a financial watchdog, estimated some 18,000 workers participated in the event.

Laborers from the Industrial Bank of Korea and Nonghyup Bank showed higher turnout rates, the FSS said, than the four largest banks - KB Kookmin, Shinhan, Woori and KEB Hana. In fact, only 2.8 percent of employees at the four big banks participated.

The lower-than-expected participation reflects the majority of workers’ lukewarm support for the campaign against the performance-based salary system, according to the Financial Services Commission (FSC), the country’s top financial regulator.

The labor union, however, disputes this view, saying that the management and regulator both directly and indirectly tried to block workers from attending the planned strike.

The labor association subsequently filed a complaint against FSC chairman Yim Jong-yong with the Seoul prosecution on Wednesday for allegedly abusing his power to derail the strike.

The flashpoint of the dispute between the two parties is the government’s plan to broaden its performance-based salary program to include junior-level employees, starting next year.

“The government’s new salary system can lead into easy layoffs and will threaten job security,” said Kim Moon-ho, head of the Korean Financial Industry Union. “Unless the government and management cancel the plan, we will go on second and third strikes.”

The union held a strike in 2014 to protest the government’s bureaucratic interference with the industry. At the time, 30,000 union members attended the one-day walkout.

The financial authorities, however, said that the new system is designed to increase competitiveness in the banking industry, which saw declining profits over the past years.

Chairman Yim said earlier this week that the financial industry’s movement will never win public support since many workers in the industry received lofty salaries despite the general downturn in the banking industry.

The chairman described the strike as “extreme,” calling on the union to halt it on Wednesday.

In a separate event, the labor union of the Korea Exchange, the operator of the nation’s stock exchange, threatened a strike on Friday, accusing the operator of giving into the government’s pressure in selecting a new chairman.

The operator announced on Thursday that Jeong Chan-woo, vice chairman of the Financial Services Commission, has been appointed head of Korea Exchange.

The labor group claimed Jeong was selected because of his connections with President Park Geun-hye.