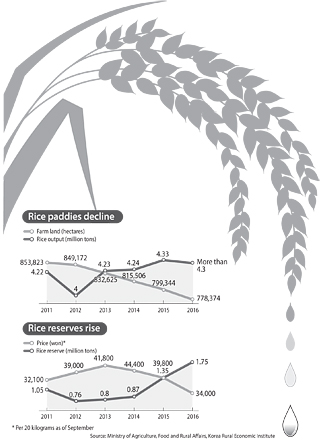 Lee Hyo-shin has been growing rice for 27 years on his farm in North Jeolla. The 52-year-old farmer has harvested 530 kilograms (1,168 pounds) of rice per every 1,000 square meters (10,763 square feet) last year and he is expecting this year will yield another good harvest. However, he isn’t happy about it.

“It is a total disaster,” Lee said. “Rice prices are falling and there are not that many places to sell my rice now.”

The government will announce this year’s rice output next month. According to the Ministry of Agriculture, Food and Rural Affairs, Korea harvested a record 4.32 million tons of rice last year. This year is expected to be about the same and possibly more.

Rice harvests have been successful since 2013 although the amount of land used to grow rice in Korea dropped. Land for rice crops fell 6.5 percent from 832,625 hectares in 2013 to 778,734 this year. Output has risen largely on increased productivity. Global warming is one of the main factors helping Korea’s rice farms. The country is becoming a better place to grow rice due to the warmer weather and the abnormally hot temperatures that hit this summer, the best conditions in which to grow rice. There were no significant damages reported this year due to floods or typhoons.

The temperature during this year’s rice ripe season, from July 27 to Sept. 14, was 1 degrees Celsius higher than other seasons and solar radiation was 1.3 hours longer, the Rural Development Administration said.

However, rice farmers are not welcoming the news.

The price of rice is declining as well. Twenty kilograms of rice was 34,000 won ($30.82) on Thursday, the lowest price in six years, the Korea Agro-Fishers & Food Trade Corporation said.

“The demand for rice is dropping 3 percent a year on average and the amount of land and production are not going down, or catching up with the demand,” said Kim Tae-hoon, a researcher at Korea Rural Economic Institute.

The government also has failed to solve the oversupply problem. It announced plans to boost rice consumption by diversifying food products that contain rice and by buying more rice from farmers and distributing it to low-income households. However, the government’s efforts have not been effective due to problems such as limited demand for rice.

“The government and farmers need to separately grow high-quality rice and a low-quality one,” said Kim Han-ho, a professor of agriculture and economics at Seoul National University. “The government can give more incentives for farmers who change their rice farms to grow other crops to solve the oversupply.”

Meanwhile, the government said Monday that it will buy 390,000 tons of rice to stabilize the market.