SK Planet gets into clothing rentals

SK Planet gets into clothing rentals 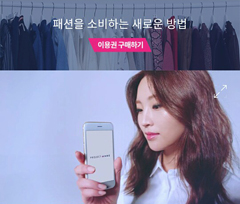 SK Planet, the digital content and marketing arm of SK Group, is launching new smartphone app, “Project Anne,” which allows subscribers to try on designer clothing for a month before making a final purchase decision.

The company said it wanted to apply the concept of streaming, normally associated with online music and video content, to fashion by allowing people to try clothing without necessarily having to own them.

“Our target is consumers who are prudent in making choices and curious about trying clothes from various brands but hesitate to purchase them because of price issues,” an SK Planet spokesman said.

After signing up for the service through the app, a user can choose from different payment options based on the number of items they want to try during the one-month trial period. One option, for example, includes trying four pieces of clothing for 80,000 won ($72.50). If the subscriber decides to buy the item after the trial period, SK Planet will collect the borrowed item and send a new one.

The idea of borrowing and trying clothing through an online service is not new, with U.S.-based online fashion rental service Rent the Runway expected to surpass $100 million in revenue for the first time this year since its establishment in 2009.

In Korea, where personal items like clothing were once considered too intimate to lend, the trend is also catching on. Start-ups Want to Wear, which rents out department store and designer brands, and Corental, which specializes in more upscale luxury brands, both launched last year. The two companies’ services allow customers to borrow clothing for a limited amount of time and return them after the rental period is over.

Lotte Department Store became the first in the country to open a brick-and-mortar store dedicated to fashion rentals. Opened in July in the retail giant’s Sogong-dong branch in central Seoul, the store, Salon de Charlotte, lends premium-brand clothing and accessories for two to three days for a fee of 100,000 won to 300,000 won.

“The trend in streaming implies that consumers have shifted their focus to ‘enjoying’ the content without necessarily owning them,” said Kim Min-jeong, a manager at SK Planet. “Likewise, the fashion industry is predicted to change in a similar way, where consumers can try out new items or styles that they wouldn’t have experienced if it were not for rentals.”