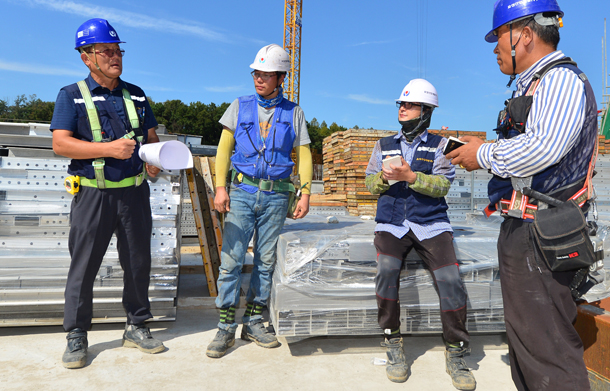 Seo Yu-bok, left, shares his ways of studying with colleagues at a construction site Tuesday afternoon. Seo, who started his studies at the age of 50, holds six technician’s certificates and plans to acquire another certificate for the execution of building work. [WOO SANG-JO]

A 59-year-old carpenter named Seo Yu-bok received the Prime Minister’s Award for lifelong learning on Wednesday. Seo was credited for pursuing lifelong learning, as he started studying at the age of 50, acquired six technician’s certificates and continues his studies even today.

As cosponsors of the award, the JoongAng Ilbo, the Ministry of Education and the National Institute for Lifelong Education hope to encourage individuals and organizations that pursue and support lifelong education.

Seo, the youngest of seven children, was raised by a single mother, as his father died when Seo was young. He was so poor that he was unable to afford a uniform upon entering high school, and he eventually dropped out. He hadn’t been able to find a decent job until his mid-20s, when he moved to Seoul, where he started working for a construction company.

But Seo remained determined and devoted himself to his work for 30 years, until a back injury forced him to take a rest. “Stuck in a hospital room, I was afraid of never being able to work again,” he said. It was then, at the age of 50, when Seo decided to pursue his studies.

But resuming his studies after a 30-year hiatus wasn’t easy. Seo could barely make enough time to study. “I woke up at 4 a.m. and came home after work around 9 p.m,” Seo said. “I had an hour of study time, if I was lucky.”

He passed the qualification exam for high school graduation in 2014 and continued studying every winter, when he had less work. Starting with a craftsman forms certificate, which he earned in 2008, he obtained a total of six technician certificates, including those for architecture, safety engineering and architectural engineering.

“I was promoted to intermediary manager after acquiring the certificates,” Seo said. “My life is so much different now.”

Seo sacrificed his sleep to study more. When he was preparing for his university qualification exam, he used all his spare time studying mathematical equations and English vocabulary.

While studying for his architecture technician’s certificate exam, Seo wrote and posted clauses from the building law code almost everywhere in his house and office.

But Seo isn’t finished yet.

“Accomplishing my goals one by one helped me dream bigger,” he said. Seo plans to acquire another certificate, for execution of building work, and he encourages his colleagues to study, as well.

“There are many construction workers who want to continue their studies,” Seo said. He shares with them his methods for preparing and also gives advice online.

A 31-year-old designer named Jang Hyung-chul, who studied fashion with an academic credit bank system, and Kim Mal-bun, a 39-year-old restaurant owner who contributed to local lifelong learning, are also winners of the Minister of Education’s Awards. For the group section, Whimoon High School in Seoul, Gijang County Government in Busan and Suwon Lifelong Learning Center were awarded for their contribution to local lifelong learning.

The awards ceremony took place with the opening of the Korea Lifelong Learning Expo at Geochang Cultural Center in Geochang County, Gyengnam, on Thursday. The expo, open until Sunday, will be attended by a total of 250 lifelong learning cities and lifelong education institutes and will host various exhibitions and programs.