School teaches adults to tackle second half of life

School teaches adults to tackle second half of life 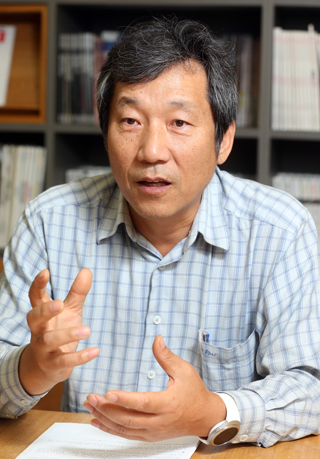 Jung Gwang-pil, dean of the 50+ Life School, talks about the second half of life. [KANG JUNG-HYUN]

People may be living longer these days, but they are obligated to retire at an earlier age, which means that as life expectancy increases, many are faced with the prospect of living out half their lives after retirement.

A new term to describe such people, “50+,” refers to those in their 50s and early 60s who have lived for five decades and now have five more to go.

The “50+ Life School,” operated by the Seoul Metropolitan Government, offers training for people in their 50s so they can open up new businesses or engage in diverse social activities.

Simply put, it’s a program that helps 50+ individuals map out the second half of their lives. Seoul plans to expand the number of 50+Life School campuses from one to six by 2018.

Seobuk 50Plus, located in Eunpyeong District, northern Seoul, which opened in April, is the first such campus. Jung Gwang-pil, dean of the 50+ Life School, is himself part of the 50+ generation.

When JoongAng Ilbo interviewed the 59-year-old on Aug. 31, he started off with the issue of generation discord rather than plans for later life, health or various related topics.

“If we want to talk about the 50+ generation, we need to observe their very nature first. Those in their 50s now were major players in the fast-growing Korean economy. They have substantial work know-how and human resources networks, and some have reshaped the political landscape in Korea. Also they are surprisingly healthier than any of their age have been in the past. Driving out this workforce as simply ‘old people’ is a great loss for the country. While engaging with the first round of trainees in the 50+ Life School during the first half of the year, I felt enormous energy, as well. They have this invaluable assets such as problem solving skills, speed of execution and hands-on experience, which I thought must be utilized in society.”

Jung believes society should make use of their overwhelming energy for the young generation, who are walking a rocky path. He recommends that 50+ members loosen up and push themselves to do more meaningful work.

“They will hike mountains fully dressed in climbing clothes or go golfing. Maybe even just stick around in front of the television. Life after retirement without preparation generally looks like that. Then they start feeling empty because they can’t find meaning in life, then later they face depression. They need to find something they can do and it’s even better if it can be of help to somebody else. There are many communities our first round of trainees created and there is a gathering catered to supporting youths producing plays or independent films. They are not approaching the issue by simply funding them. They first ask the youth what they need. Problems while producing films, administrative works… there are always problems. And this is when they take action. They discuss the problems that younger people have no knowledge of or don’t have enough power to solve and give suitable advice. I’m saying we should bank not on the 50s’ money but on their skills. Rather than acting like poor old persons, older adults need to first hold out their hands to the young. Generational discord seems like a very difficult problem, but these little steps could lead to unexpected short cuts.”

To make it a reality, though, adults need to start learning.

“Recently, the hot term in education has changed from ‘university entrance’ to ‘lifelong education,’” Jung said. This refers to the change in perception that education is for all generations and not only certain age groups.

“Retirees are mostly driven out of the company. But they are only halfway through life and they shouldn’t hesitate to learn. Various government organizations offer retraining programs. Our 50+ Life School is one of them. There are classes for workers and for those who only have time on the weekends. There are lots of opportunities. Stepping forward to learn in advance takes a big burden off one’s shoulders after retirement. The classes also help build new relationships. The changes people will go through during the next 20 years will be more destructive and rapid than any other we have undergone during the past 20 years. Just think of artificial intelligence. Not only children but the 50+ generation also needs to have the desperation to learn and be prepared for the future.”

At 50+Life School, most of the classes are operated in a workshop style. During the 10 weeks of each semester, only two classes are lectures and all other involve trainees having to actively work out problems. After some time, trainees form independent communities to contribute to society. One of these is the Value Bank Community, which helps poor people through various networks. There is also the Brain Exercise Community.

“There are good lectures everywhere and many of them tell people to do this or that. It is certainly helpful to listen to a speech from successful figures, but it is difficult to pick up their teachings and apply them to our lives. Our 50+ Life School is just a basic entry course. I think what people should gain through this program is bravery to start out a new life. To do that, it’s helpful to meet good fellow workers to run through the second half of the life game together and spend more time mapping out plans for the future.”

Jung is actually more familiar being called a principal rather than a dean. His dedication to education began when he was in his 40s, as problems regarding school entrance exams and private education surfaced in the mid 1990s.

“I couldn’t just turn away from children who were screaming that they couldn’t find any hope in school, so I wanted to prove to them that school is a meaningful place,” Jung said. What he built up in 2003 was Ewoo School, an alternative school located in Bundang, Gyeonggi. Jung was the first- and second-term principal of the school. So what made him turn his eyes to 50-somethings?

“My thoughts changed while taking part in the SBS documentary ‘Wind of School,’ broadcasted earlier this year. We were discussing what to talk about with children and I found out the producers of the program, in their 40s and 50s, were more interested. For instance, we discussed topics like ‘Who am I?’ or ‘How do I face unchangeable truth?’ Thinking about it, I realized that generation has never been taught about these topics in school and didn’t get a chance to go to school years later, either. They were more forced to think about their roles in the family, at work and at diverse organizations. From there, I found inspiration to open up this life school.”

Seoul’s 50+ Life School is spotlighted by diverse local government organizations these days. “It’s not Seoul’s own burden to figure out ways to support retraining of adults. Many organizations have been asking for lectures lately. I think it all boils down to what ‘model’ we will take. I hope positive energy from the 50+ Life School could ultimately spread all over the nation.”