Invitation to a pre-emptive attack?

Invitation to a pre-emptive attack? 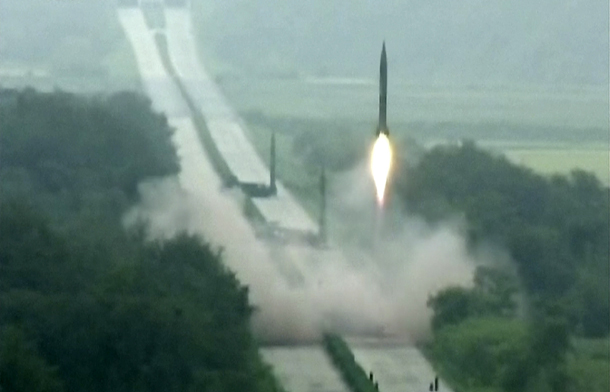 On Sept. 5, North Korea fired three medium-range missiles that traveled about 1,000 kilometers (620 miles) and landed near Japan in an apparent show of force timed to coincide with the G-20 economic summit in China. [AP/NEWSIS]

On Tuesday, North Korea announced that it had successfully conducted a ground test of a new long-range rocket engine. The purpose of this engine would be to put a satellite into orbit with a space launch of the Unha rocket, according to press statements. The technology, however, can be used to launch an intercontinental ballistic missile with a range of 7,000 to 7,500 miles. This could reach the United States territories including Guam, Hawaii, Alaska and California.

At the same time, with its fifth nuclear test, the North announced this month that it has now standardized a weapons design for a miniaturized nuclear warhead that could be placed atop a ballistic missile. All of these actions are designed to make North Korea into a full-fledged nuclear weapons state before the next U.S. president is elected. Pyongyang believes that by demonstrating a survivable nuclear deterrent, its nuclear capabilities will make the regime more secure against external attacks. This is patently wrong.

North Korea in my estimation lacks a fundamental understanding of nuclear deterrence. They have studied the history of U.S. nuclear policy including the Manhattan Project, Eisenhower’s doctrine of massive retaliation, the START treaty, and Reagan’s Star Wars project (the precursor to missile defense). However, they do not understand the strategic interaction that takes place between two nuclear weapons states and the dangers inherent in efforts by one side to rapidly change the status quo.

For example, when North Korea had a few bombs in the basement, it may have posed a threat, but there was little chance of crisis instability or escalation because the weapons were not deliverable. If there were a conventional military conflict on the peninsula, there was little chance this would escalate to the nuclear threshold as the bombs were not usable as weapons. They served as a deterrent, perhaps only in the minds of North Koreans.
North Korea is now rapidly building its nuclear weapons force, and it is maintaining its artillery force, but allowing its conventional Korean People’s Army military capabilities to decline because of lack of funding, resources, and training. For Pyongyang, this is an asymmetric strategy that leverages the two things it thinks it does well — nukes and artillery — to make itself more secure.

However, this does not make it more secure. North Korea has truncated the escalation ladder so that if there were ever a conflict, Pyongyang would have nowhere else to go up the escalation ladder after artillery except to its nuclear weapons. This compels the United States to pre-emptively attack the nuclear forces at the first sign of conflict.

Another example relates to this rocket engine test. Now that it has conducted the ground test, the next step would be to test a long-range ICBM, probably in the form of the Unha rocket, which the North would claim to be for the purpose of putting a satellite into orbit. Some say this may come as early as October 10, the next major holiday in the North (anniversary of the communist party).

However, if Pyongyang starts to stack the components of a long-range rocket on a launch pad in the coming days, the United States does not know the true intention of that rocket. And in particular, Washington does not know what will be on the top of that rocket. Will it be a satellite? Will it be a dummy warhead? Or will it be the new “standardized design” nuclear warhead that the regime has boasted of with the fifth nuclear test?

The North often shrouds the rocket so it is not visible with satellite imagery until it is ready to launch. Any responsible U.S. national security official cannot give the North Koreans the benefit of the doubt that the missile is not a threat, and would have to consider striking the missile on the launch pad, or intercepting it after launch with ballistic missile defense.

North Korean nuclear actions are not buying it more security. It is instead compelling the United States to consider military options that will make North Korea more insecure and more vulnerable to a military strike.

There is no conversation between the U.S. and DPRK to acknowledge the dangerous situation that we are now entering.


*The author is a professor at Georgetown University and senior adviser at CSIS in Washington D.C. His new book is “Powerplay: Origins of the American Alliance System in Asia.”