A martial arts-heavy ‘Showdown’ : Inspired by Jackie Chan, creative duo team up to create an action-comedy

A martial arts-heavy ‘Showdown’ : Inspired by Jackie Chan, creative duo team up to create an action-comedy 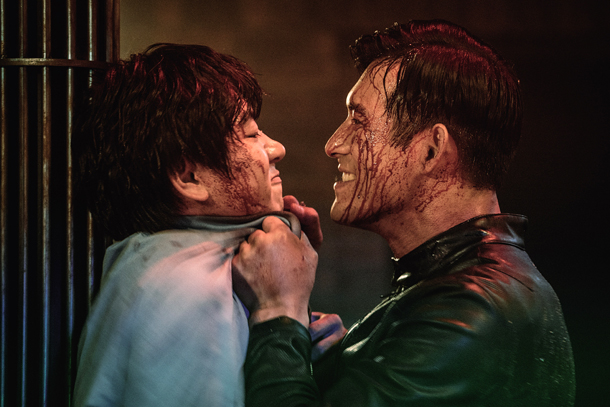 A scene from action-comedy “Showdown,” which showcases a variety of martial art styles. [JOONGANG ILBO]

If a stressed out job seeker went head-to-head in a fist fight against a company CEO, who would come out on top?

That’s what action-comedy film “Showdown” (released Sept. 22) is all about. It’s a story about an extremely poor unemployed man, Poong-ho (played by Lee Ju-seung), who relieves stress by beating up people he finds online. However, he meets his match when he gets involved with an extremely rich CEO, Jae-hui (played by Oh Ji-ho), who lives for the addictive rush of fighting.

Director Shin Dong-yeop and writer Min Kyung-geun, the creative forces behind last year’s “Untouchable Lawmen” have teamed up once again to deliver an action-packed thriller. 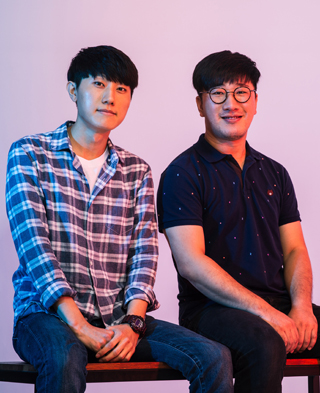 Q. It’s been a while since we’ve last seen a Korean action-comedy film. What were your inspirations?

A. Shin: I was always a fan of Jackie Chan’s martial arts films when I was young. It’s been a dream of mine to create a film like “Drunken Master.” As I was developing as a director, I came up with the idea of experimenting with that concept, but with a young unemployed street martial artist. The message I wanted to convey with this scenario was smoothness always overcoming brute strength, regardless of the situation.

It’s interesting to hear about the ‘Drunken Master’ influence.

Min: I was motivated to write a truly stress-relieving story when I was given the proposal by the director. However, trying to portray the smoothness of the drunken master in real-world situations was difficult, especially when it came to trying to make it seem natural. I referred to many films that contained just bare-bones fighting, and crafted a script that told the story through action rather than dialogue.

Shin: I have trusted in Min’s ability to create a unique story ever since we worked together on “Untouchable Lawmen.” His creativity is top-notch, and his individuality is clear. It’s thanks to him that we were able to make a movie filled with inspiration from not only “Drunken Master” but also of many other actions films as well.

What are your reasons for always making unfortunate protagonists?

Shin: I’m still experiencing growing pains. Even though I make a living in the film industry, I always wonder how much I can further satisfy the audience, and how much longer I can maintain my career. Maybe that uncertainty is being manifested in my characters (laughs). To be honest, it would be boring if the protagonist’s life was safe and perfect.

Min: During my days as a soldier, I would spend all of my free time writing when I was off from work. When I quit that job to pursue my dreams, I felt very anxious and insecure. I can relate with Poong-ho (laughs).

You were selected to be a part of the ‘Creative Talent’ mentorship program at the Korea Creative Content Agency. Both “Untouchable Lawmen” and “Showdown” were written during that time.

Min: The mentorship program was a big help in easing my uncertainties and allowing me to gain traction as a writer. I was regularly guided by my mentor, and I also walked away with knowledge from special lectures given by directors such as Choi Dong-hoon. The monetary support was a big help as well. During my two years in that program, I completed eight scripts. It was admittedly difficult to concentrate on my writing since I was juggling part-time jobs simultaneously, but I was still able to write as much as I wanted.

What are your next projects?

Min: I want to write a fun and unique script that only I would be able to write. No matter what anyone says, films will always be a game.