An artist’s rendering shows the Dallas office buildings that Mirae Asset Global Investment’s public fund will invest in. U.S. insurer State Farm has signed a lease for more than 20 years and will use the site as its headquarters. [STATE FARM]

Mirae Asset Global Investment has begun accepting investors in the public fund that will be the country’s first to invest in U.S. real estate.

The fund will be open to investors at the sales branch until Wednesday. The maturity of the fund is seven years and six months with a minimum investment of 10 million won ($9059). However, sales could end early once the fund reaches its maximum ceiling of 300 billion won.

With key interest rates near 0 percent making bank deposits unappealing and stock investments being risky, becoming a partial owner in a U.S. property for just 10 million is appealing to local investors.

The target of this fund is four prime office buildings in Dallas. Construction on these buildings started last year and is expected to be completed this year. The buildings are in the prime location of CityLine, where the Dallas government has been strategically developing a one-stop location for high-quality businesses and entertainment. 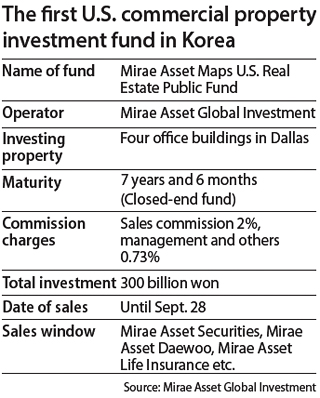 Mirae Asset’s selling point of the fund is the office will be leased to State Farm, one of the largest U.S. insurers with nearly 100 years of history. State Farm has signed a contract to lease the building for its headquarters for more than 20 years, which will guarantee a steady investment return as there will be no fear of losses caused by a vacancy when the economy is in a downturn.

“The biggest concern when investing in office buildings is whether the spaces will be leased and there would be tenants unable to pay their rents,” said Sung Tae-kyung, retail marketing managing director at Mirae Asset Global Investment. “The funds that are investing in buildings have no such risks.”

Mirae Asset Global Investment estimates an annual profit of 5 percent to 6 percent and it will distribute the profits every half a year. The first distribution will be made at the end of June.

While Mirae Asset claims there are no risks in the lease it is difficult to guarantee profits. Usually the problem comes when selling off the building when the investment fund reaches its maturity.

If the U.S. commercial real estate market crashes in the face of a crisis similar to that of 2008 it won’t be easy to sell the office building for its appropriate price at the proper time.

Additionally the value of the real estate in the U.S. has already risen and with an investment rate increase by the U.S. Federal Reserve, experts warn that investing overseas real estates could be a risk.

In fact, commercial property transactions in the U.S. have been shrinking compared to the same period last year for four consecutive months since March. This is the first time since the 2009 global economic crisis.

“When looking at the economic indicators in the U.S., investing in U.S. real estate market can be dangerous,” said Kim Hoon-gil, analyst at Hana Financial Investment. “The shrinking trade of real estate [in the U.S.] seems a signal of risks.”

One official at an asset management company said if the property has favorable investment conditions the fund would have already succeeded in collecting the needed investment from institutional investors.

He said the fact that Mirae Asset is trying to collect investments through retail investors is proof the office building isn’t an attractive investment.

The managing director at Mirae Asset Sung Tae-kyung said there were many institutional investors that were interested in the Texas office building but added that they decided to launch a public fund as a strategic move to benefit retail investors by offering a new asset management opportunity.

“It’s an investment product that offers stable profit and because of this I plan to personally invest [in the fund],” Sung said.

But the foreign exchange is another obstacle. The won-dollar exchange on the property investment fund has been set at 1,160 won against the greenback. But seven and a half years later when the fund matures and if the won’s value falls more than 100 won against the U.S. dollar, even if the value of the office buildings remains unchanged there could be a loss of roughly 25 billion won. Investors also have to take into account the commission. They have to pay 2 percent for sales commissions and every year pay 0.73 percent of their investment for management fees.