In e-commerce, a race to see who delivers fastest

In e-commerce, a race to see who delivers fastest 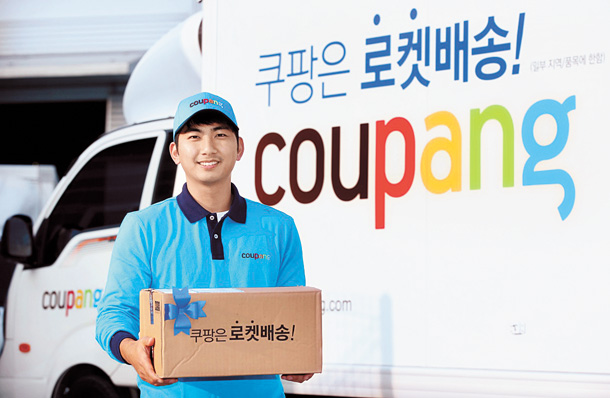 Park Na-ri, the mother of a 2-year-old girl, purchases diapers through mobile shopping apps every month because the prices are usually lower or comparable to that of supermarkets, not to mention the added convenience of delivery right to her doorstep.

Lately, many of these e-commerce companies have begun offering same-day delivery services, but customers like Park say they have been less than impressed.

“Most of the moms put in orders for diapers in advance so they don’t run out of them,” Park said. “And since they are usually delivered by the next day, I don’t think it’s necessary to have such bullet-fast delivery service.”

Many online shopping sites and apps that connect individual sellers with buyers are publicizing speedy delivery services to customers, but the feedback has mostly been negative.

Two major e-commerce operators, TMON and WeMakePrice, recently launched same-day delivery in hopes of setting a new standard for delivery speed. Their ambitious services, though, have turned out to be less convenient than advertised, with coverage areas limited and various restrictions on when they can order goods to get the service.

WeMakePrice began its “buy now, get it straightaway” delivery service on Aug. 25. The idea was to have products sent to customers right after ordering them, as fast as within 10 minutes. The company signed contracts with major parcel delivery service companies as well as smaller firms in Seoul that have their own trucks. WeMakePrice made sure there was at least one truck in each district of Seoul to transport goods as soon as they were ordered. 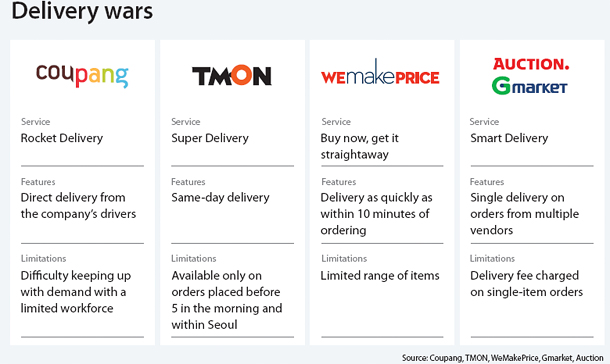 However, service coverage has been limited to the city of Seoul and only on 12 daily-use items such as diapers, powdered milk and wet wipes. The free delivery deal on orders above 9,700 won ($8.80) hasn’t been much of a deal, either, since diapers and powered milk already cost well over that amount.

Users have been critical of the system, calling it a good-for-nothing service. A spokesperson from WeMakePrice explained that “the item range is small because the new system has only been implemented for a month, but we are planning on broadening the categories to grain and groceries.”

Competitor TMON recently expanded its “Super Delivery” service, which it launched in October 2015. The service originally started with three districts in Seoul - Gangnam, Seocho and Songpa - and was expanded to 14 districts in the city during the first half of this year. The service went nationwide on Sept. 1.

Super Delivery covers 8,000 daily-use items but only those sold directly by TMON. A dedicated team at Hyundai Logistics works exclusively on TMON deliveries. However, to get goods delivered on the same day, customers have to place their orders before 5 in the morning. Orders made after that time are delivered the next day.

“There are realistic obstacles to expanding the service area outside of Seoul and with delivering goods sold by individual vendors on the same day [which is currently not offered],” TMON said. “But we have plans to extend the same-day delivery order time to noon by the end of this year.”

The race to offer quick delivery started with Coupang, when it began offering “Rocket Delivery” in 2014. The company broke from the traditional business practice of shipping orders through a parcel delivery service by hiring its own “Coupang men” to transport goods.

But even Coupang is facing trouble, as the company is unable to handle the growing demand with their few Coupang men. The company eventually had to sign contracts with professional delivery services to keep up with orders.

Last November, the chief executive officer of the company, Kim Beom-seok, revealed plans to raise the number of Coupang men from 3,500 at the time to 15,000. The current numbers, though, are far from the target, with only 3,600 deliverymen working for Coupang.

Free delivery service, which online shopping operators have been quick to adopt, has been a thorn on the side of sellers, who have to pay half the delivery charge with the online shopping site. This presents a dilemma for sellers because products that are delivered for free appear at the top of webpages and get more exposure.

One vendor surnamed Park used to sell snacks on an online shopping site but had to give it up because “the company paid for all the delivery charges a few years ago but started charging sellers half the amount since last year. Paying for the deliveries left me with no profit, and charging the fees to the customers left me with no sales, so I stopped selling on websites.”

Those working in the business say such overheated competition on delivery services is an unproductive distraction from price competition. One insider explained that “the essence of an online market lies in providing customers with a cheap and convenient shopping experience. Competing over the speed of delivery has really nothing to do with it.”

“If the competitor comes up with a faster delivery system, we have to respond with a new and different service, or else we fall behind,” said a representative from an e-commerce operator. “It’s true that we’re caught up on restructuring our profitability, but we have no choice.”

In fact, total losses for the country’s three major e-commerce companies connecting buyers and sellers - Coupang, TMON and WeMakePrice - have exceeded 800 billion won, according to the Financial Supervisory Service.