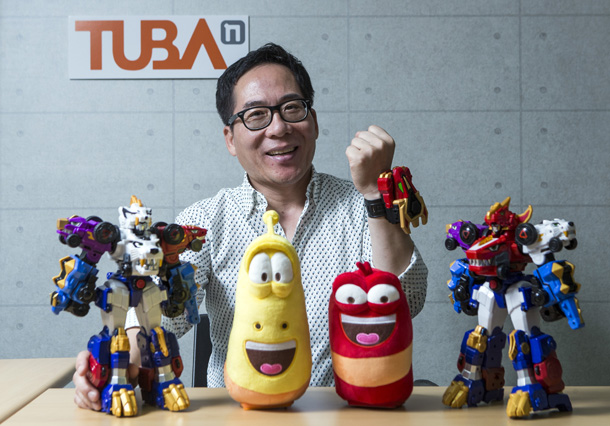 Kim Kwang-yong, CEO of TUBAn, poses with the Larva dolls and Dino Core toys his company produces at his office in Jeongdong, central Seoul. [JOONGANG ILBO]

TUBAn, the animation production company that created a series of 90-second silent cartoons entitled “Larva,” has launched another series named “Dino Core.” Kim Kwang-yong, the company’s CEO, revealed his plans to overcome “Larva’s half success” with the new production against its rival company, Sonokong.

Sonokong has been dominating the domestic animation market with its robot animation “Turning Mecard,” making a profit of over 100 billion won ($90 million). Kim’s plan centers on releasing tie-in toys in tandem with the animated series.

“Larva” is the story of two larvae, one red and the other yellow, who struggle to avoid drowning in a pool of snot, laugh at a beetle that gets repeatedly stabbed in its rear end, fight over a sausage, protect each other from a bee, travel to New York and have other miscellaneous adventures.

“Larva” has been the company’s best product since its first release in 2011, constituting more than 90 percent of all sales. The company is planning to build the first urban animation theme park near the Seoul Museum of History, which will include an augmented-reality game similar to Pokemon Go. 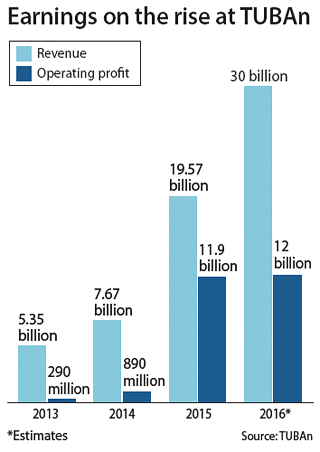 “I’m standing at my second crossroads,” said Kim in an interview on Aug. 23, just before the airing of “Dino Core.”

Graduating from Hongik University with a degree in advertising design, Kim founded an outsourcing company producing special effect images after working in a computer graphic company. The firm expanded and now has 50 employees.

“That’s when I thought that it would be a waste of my skills if I kept doing other people’s work,” said Kim, so he made another branch for animation production in 2007, which later became TUBAn.

“That was my first crossroads,” he said. “I had to choose whether to produce games or animation, because both were based on special effect images. I chose the latter since it has more potential to be enjoyed by all family members. I wanted to make something that would last long and teach people about kindness, like Snoopy and Mickey Mouse. The results were disastrous, though.”

“Vicky and Johnny” and “Oscar’s Oasis” were his first projects. Even though both received good reviews from within the animation community, audiences panned them, leaving him with 12 billion won in debt. Kim decided to produce Larva to overcome this crisis, thinking that if he failed, it would be his last work ever.

“The story is what matters,” said Kim, “even if the quality of the images is a little poor. The reason we went with larvae is because their simple cylinder shapes were easy to make.”

The characters’ exaggerated expressions and humorous gestures were influenced by Charlie Chaplin. The whole production cost was approximately 1.5 billion won, half the average amount for a project of a comparable size.

When confronted with a shortage in his marketing budget, he came up with a low-budget solution: more exposure.

“I thought I would first have to get people to know the characters to make them remember,” he said, “so I distributed the video files for free. I was hoping to profit by character licensing.”

The producer uploaded the video files on YouTube and distributed them to public transportation companies for free. The outcome was a huge success. The larvae caught up with all other popular characters in Korea, such as Tayo the Little Bus and Pororo, getting its very own Larva Subway, just like Tayo Bus. It soon received over one billion views on YouTube, and Erica Rivinoja, a famous Hollywood producer, is currently adapting the series to become a film in 2018.

“Larva is very popular now among the young generation,” Kim said, “and there are more than a thousand ‘Larva’ products. But unfortunately, the popularity didn’t directly lead to sales. That’s what ‘Dino Core’ is here for, my second crossroads.”

Although “Larva” gained him fame in 2012, it was only in 2013 that sales significantly went up.

“It was difficult to manufacture products and deal with copyright issues after having become popular,” said Kim. “That’s why I implemented the Disney method, producing the animation and releasing it simultaneously with tie-in products.”

Animation producers and toy developers are working hand-in-hand to make the toys move just like they do on screen. The chief executive is even said to have recruited a Hyundai Motors component researcher for advice on the toy designs. The company is also keen on scouting talented personnel, offering up to 27 million won as an initial salary, the highest amount in the business for college graduates.

“I’m willing to raise it to 30 million if that’s what it takes to stop talented individuals from leaking to the game industry,” said Kim.

Thus “Dino Core” was made, the story of an ordinary boy, Rex, who saves Earth from an alien invasion by controlling Dino Core, a robot that transforms from the shape of a dinosaur into various cars.

The animated series has been televised since Aug. 26 on Tooniverse, a television channel specializing in animation, and already a toy contract for five billion won and a license sales contract worth one billion won have been signed. Additional license contracts have been made on 28 products, including children’s beverages, toothpaste and stationery.

“The reality of the business is,” said Kim, “that only ten percent of the production cost can be made up by televising. And it’s really hard to get the kind of funding that movies do. I hope that simultaneously releasing the animation and related products will bring positive results.”