Samsung scion at a crossroad

Samsung scion at a crossroad 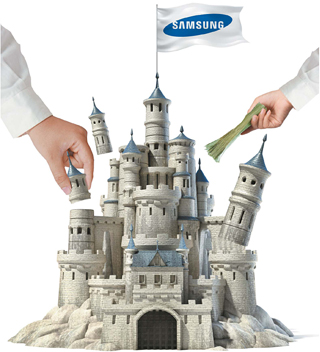 Samsung Electronics’ board of directors named Vice Chairman Lee Jae-yong as a board member on Sept. 12, a decision that came five months earlier than originally scheduled.

The timing could not have been more crucial. Less than two weeks earlier, reports of the company’s Galaxy Note7 device overheating and melting led the world’s top smartphone producer to suspend sales of its two-week-old flagship phone and announce a de facto recall of its entire shipped and preordered volume.

What could have been a crowning achievement for the heir-apparent instead became a nightmare, as the high-end smartphone with innovative features like an iris scanner was soon discovered to be carrying fire-prone batteries supplied by affiliate Samsung SDI.

“More than two years after the hospitalization of Chairman Lee Kun-hee,” Samsung said in a statement, “the board believes that the time is now right to nominate Lee Jae-yong as a member of the board to allow him to take a more active role in the company’s strategic decision-making.”

Lee’s assumption of the board member post, which will be confirmed at a general shareholders meeting on Oct. 27, means he will be taking legal responsibility for all management-related decisions. The change signals that the only son of the bedridden chairman is one step closer to becoming the next patriarch of the Samsung empire, even though the group has yet to specify a timeline for Lee’s appointment to the top post.

Although it is still unclear how the Note7 scandal will unfold given that its recall is still under way, Samsung’s latest move has received upbeat evaluations from industry observers.

“[The appointment of Lee to the managing post] is a positive measure, both in terms of an ethical point of view and shareholder value enhancement, in that he has been criticized by many for evading his responsibility,” said Lee Seung-woo, an analyst at IBK Investment & Securities.

“Becoming a managing director is a quintessential and formal procedure that Lee has to take to be officially endorsed as an heir to Samsung,” said Kim Sang-jo, chairman of civic group Solidarity for Economic Reform and professor of economics at Hansung University in Seoul.

Kim noted that this means Lee will be closely monitored by the market and the public from here on out and has to be much more faithful to legal duties and responsibilities corresponding to his authority and power.

The fact that Samsung pushed up the date to name Lee as a board of director suggests the urgency of the Note7 issue.

At the same time, Samsung is using the scion’s added role as a promotional tool to proclaim that the chaebol family is “that much more determined” to take the bull by the horns in the face of the unprecedented crisis. In a calculated gesture to show that the company’s flagship device is safe, Lee appeared at the lobby of Samsung Electronics’ Seocho building in southern Seoul on Wednesday carrying a Note7 in one hand on his way to his office.

Even though the Harvard Business School-educated vice chairman’s succession has been accepted as a natural course for Samsung in the past decade or so, the mission remains for him to prove to the Korean public that he is qualified enough to lead the conglomerate that is so heavily identified with Korea Inc.

“Lee needs to impress observers with major achievements to take over control of Samsung without a hitch. If he patches up the Note7 scandal with success, it could be counted as one of his accomplishments,” said Park Sang-in, professor at the Graduate School of Public Administration at Seoul National University and author of a book released in February titled “The Fall of Samsung Electronics and the Korean Economy.”

The professor warned that Lee’s poor handling of the situation could further jeopardize the country’s top chaebol, which relies heavily on its smartphone business.

On the same day that Samsung Electronics’ board of directors decided to award the vice chairman a board membership, the company announced the sale of its printing division to HP for 1.2 trillion won ($1.1 billion).

Less than a week later, Samsung made public that it would sell off its shares in four foreign tech companies focused on semiconductors and displays. This includes a 1.5 percent stake in Netherlands-based ASML, a 0.7 percent stake in Japan’s Sharp, a 4.5 percent stake in California-based Rambus and a 4.2 percent stake in Seagate Technology. The shares, worth over 1 trillion won combined, were bought by Samsung between 2010 and 2013.

Along with the 1.2 trillion won it is set to gain from the deal with HP, which is scheduled to close on Nov. 1, Samsung will secure over 2 trillion won in just two months, which will add up to the $70 billion of cash and marketable securities it sits on.

“The sales of shares are meant to shore up core businesses by utilizing past investments,” Samsung said in a statement.

In the name of “pragmatism,” a phrase that a number of Korean media outlets enjoy using to describe Lee Jae-yong’s management style, the vice chairman has been ditching noncore businesses in other Samsung subsidiaries.

Before the series of sales this month, the conglomerate sold four chemical and defense affiliates to Hanwha in November 2014 and three additional chemical units to Lotte last October, snapping up a combined 4.7 trillion won from the deals.

The group also sold two pricey buildings in central Seoul in the past year and attempted to sell Cheil Worldwide, its advertising arm, to French advertising giant Publicis Groupe, though the negotiations fell through.

Samsung says the series of deals are meant to reorganize its business portfolio in order to concentrate on next-generation growth drivers amid a crucial management transition period. Its most profitable business, mobile devices, has been losing momentum in the face of market saturation and fierce competition from formidable Chinese players. 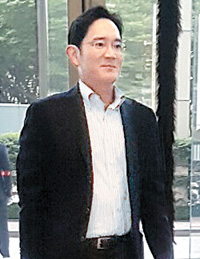 Lee Jae-yong shows up at the lobby of Samsung Electronics’ Seocho building with a Note7 in hand on Wednesday. [JOONGANG ILBO]

Samsung has only recently been outspoken about its decision to seek future business opportunities in the electronics, bio and finance sectors.

The auto industry, specifically auto parts, in-car entertainment systems and autopilot functions, will comprise a key pillar of the electronics division. In a plan laid out last December after forming its automotive electronics business division, Samsung said it hopes to create synergy between existing technologies.

In a related move, Samsung acquired a 2 percent stake in BYD, a Chinese electric vehicle and battery maker, for $455 million in July. The company said its investment in the Warren Buffett-backed company would strengthen its chip manufacturing business for electric cars.

More recently, Samsung has been in “advanced” negotiations with Italian carmaker Fiat Chrysler Automobiles to acquire all or part of its auto components unit, Magneti Marelli, for as much as over $3 billion, Bloomberg reported on Aug. 3.

Samsung’s main focus lies in the unit’s lighting, in-car entertainment and telematics business, according to the report. Should the deal come to fruition, it would mark the biggest-ever acquisition Samsung has made outside of Korea.

“An electronics company stretching to the automotive sector is an irresistible course of action under the current business trend,” a Samsung Electronics executive said regarding the deal.

But no progress has been made public ever since, even after Lee attended the board meeting in Turin of Exor, the controlling shareholder of Fiat Chrysler, on Aug. 29 to discuss the acquisition. Lee is an independent board member of Exor.

The Italian carmaker’s chairman, John Elkann, only told reporters on Sept. 3 that Samsung is one of several parties with which the company is in talks.

When asked about the deal, Park Jong-hwan, head of the automotive division at Samsung Electronics, said on Thursday he “has no knowledge of it” and refused to elaborate further.

There is little disagreement among industry observers that Samsung needs to re-enter the automotive business as other tech behemoths like Apple and Google are also shifting focus to next-generation vehicles on their upbeat prospects.

Electronic components including semiconductors currently make up a maximum of 40 percent of a vehicle’s price, but industry data suggests that is set to shoot up to as much as 70 percent by 2020, when electric cars will become more commonplace. According to U.S. market research firm Strategy Analytics, the global auto electronics market will grow to $303.3 billion by 2020, 27 percent from $239 billion last year.

But those familiar with the auto industry raise doubts about Samsung’s choice of the Italian company.

“I can’t help but wonder why Samsung, out of so many options, picked Fiat Chrysler, which I find it hard to say possesses cutting-edge automotive technologies. I don’t see any tangible benefit for Samsung from the deal,” said a former Samsung executive who served under Chairman Lee Kun-hee and wished to remain anonymous due to the sensitivity of the matter.

“It would make sense if Samsung is interested in acquiring such giants as Denso Corporation, even if the cost should be astronomical.”

By comparison, Magneti Marelli ranked No. 30 on Automotive News’ list of the top 100 global suppliers with worldwide sales to automakers last year.

Moreover, Fiat Chrysler may be an attractive partner for novice carmakers such as Apple or Google in that the company could provide them with know-how on developing and mass-producing a vehicle. But Samsung already has experience building cars before Samsung Motors went defunct and was acquired by Renault in 2000.

In the two other growth sectors, bio and finance, Samsung has been slow in coming up with detailed blueprints. Its focus in biopharmaceuticals is merely confined to biosimilars and generics instead of developing innovative products.

In finance, unconfirmed rumors have been ceaseless about the group spinning off its card and securities arms and converting Samsung Life Insurance into a financial holding company.

There is general consensus that Samsung needs to make even bolder and more aggressive acquisitions and investments to prop up organic growth in such cutting-edge fields as artificial intelligence, software, Internet of Things platforms and 3-D chips.

Speculation in the media holds that the funds secured from its latest series of sales will be mobilized as “bullets” for upcoming deals.

“Strategy managers at Samsung say they are under immense pressure to carry out a high-profile acquisition of another dominant player,” said a CEO at a Seoul-based start-up who is familiar with the situation. “But it’s not that easy.”

Despite being the No. 1 global player in smartphones, televisions and memory chips, Samsung does not have the human resources capable of gauging the potential of its business decisions, nor does it have people with ample experience in merger and acquisition (M&A) deals outside of Korea, experts say. Samsung is also still traumatized by several failed acquisition deals in the early 2000s.

The situation is not merely confined to Samsung. It is a general problem that prevails Korea Inc., which has a relatively short corporate history, according to Kim Sang-jo of Solidarity for Economic Reform.

“Even in the United States, the haven for M&As, the chance of any deal’s success is 50 percent,” he said. “Still, tech giants such as Microsoft, Facebook and Google have been constantly making M&A deals because M&As have traditionally been a key pillar of American business strategy.”

Any sizable failure could undermine Lee Jae-yong’s bid to succeed his father.

“Lee’s expanded responsibility from him joining the board could only come back to haunt him should he be found to have made a management misstep,” he said. “It remains to be seen how the heir will tackle such a dilemma, which will eventually determine the conglomerate’s future.”