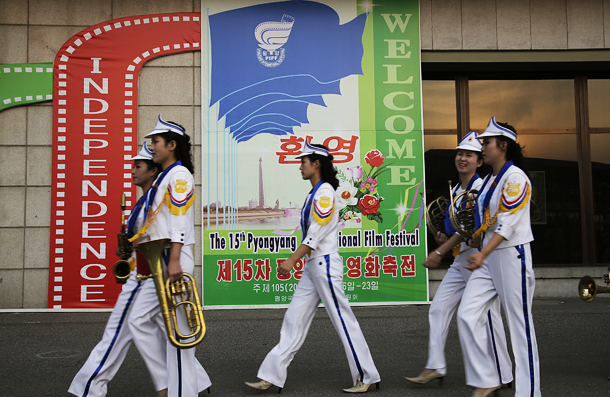 North Korean band members who performed at the Pyongyang International Film Festival walk past a sign at the venue where it was held in Pyongyang on Friday. [AP/NEWSIS]

And the envelope, please!

The Pyongyang International Film Festival wrapped up Friday with top honors going to - wait for it - a domestically produced feature about a young woman who selflessly devotes herself to raising orphans.

The winner of the “Best Torch Award,” selected by a panel of international judges, was “Story About My House,” a drama about Ri Jong-ah, who wins the honors of leader Kim Jong-un for devoting herself to raising orphans after graduating from school. The prizes were announced at a lavishly decorated hall in central Pyongyang replete with glittery gowns, golden trophies and colorful stage lighting - but no red carpets.

Like all state-sanctioned art in North Korea, the winning feature, released in September, has an explicitly political message. State media emphasized the heroine’s “ennobling mental world” and traits that are “the precious fruition of the validity and vitality of the (ruling) party’s idea and line of prioritizing the youth.” The North also entered a documentary, “Prosperous Pyongyang,” and the animated “Two Boys Who Found an Answer” in the competition part of the festival.

Other films came from Germany, France, Syria, the Philippines - 21 countries in all.

The biennial festival was a smaller affair than in previous years.

Henrik Nydqvist, a filmmaker from Sweden who has attended the festival since 2004, said fewer films were presented - 60 from the 21 countries, compared with about 100 films previously. He said that was likely due to the “difficult political situation” on the Korean Peninsula. Tensions have been rising since the North conducted its fourth nuclear test in January and carried out a fifth test this month.

Nydqvist noted that the Russian presence at the festival was more pronounced this year, with the head of the jury being Russian. Chinese participation, meanwhile, was noticeably smaller.

Pyongyang has been trying to improve relations with Moscow, while ties with China - the North’s most important trading partner and hitherto closest ally - have cooled.

Nydqvist said that although foreign participation was smaller, the festival provides an opportunity for local audiences to view foreign films they would otherwise not be able to see. Entries from abroad ranged from the Indian movie “Garbbar is Back” to the Chinese film “The White Haired Witch of the Lunar Kingdom.”

“The films have been shown in cinemas around the city, and for the more popular films I have heard that there were more people coming than there were seats available for them,” he said. “The audiences have been highly enthusiastic and for any filmmaker that is very heartwarming.”

Even so, participants said most of the films shown in conjunction with the festival were local movies, and most were not new.

North Korean leader Kim Jong-un’s father, Kim Jong-il, was famously a film buff and made a serious effort to build up North Korea’s domestic film industry. He got personally involved in the scripts and cinematography and put out a film similar to the Japanese classic “Godzilla.” He’s widely believed to have had a famous South Korean film director kidnapped so he could transform his country’s movie industry.

The number of films produced in the North appears to have dropped off dramatically since Kim Jong-il’s death in late 2011.