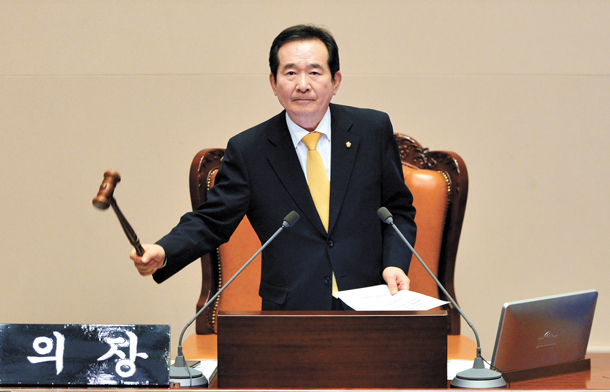 National Assembly Speaker Chung Sye-kyun declares Saturday the passage of a resolution that recommends President Park Geun-hye fire Agricultural Minister Kim Jae-soo. It was the first time in 13 years that the legislature adopted such a measure. Park made clear her rejection to the dismissal, raising the likelihood of political gridlock. [NEWSIS]

President Park Geun-hye rejected Sunday the National Assembly’s demand to fire her newly appointed agricultural minister, waging a new war against the opposition parties with the unprecedented decision to turn down a recommendation to dismiss a seating member of the cabinet.

“The National Assembly recommended the dismissal of a minister who spent not even one month of his tenure and the request had nothing to do with his ability to perform the job,” presidential spokesman Jung Youn-kuk said Sunday in a statement. “All allegations raised during the confirmation hearing were cleared up, and the [ruling] Saenuri Party also requested the president to turn down the resolution. President Park, therefore, decided to turn down the recommendation.”

The National Assembly approved a resolution early Saturday to recommend that Park dismiss Agriculture, Food and Rural Affairs Minister Kim Jae-soo, who was appointed Sept. 4. It was the first time in 13 years that the legislature adopted such a resolution. The last was passed in 2003 by the Grand National Party against Kim Doo-kwan, then-interior minister, over his failure to subdue an anti-American protest.

After Park nominated Kim, he faced a series of corruption allegations at the confirmation hearing. The opposition parties attacked him for having received special treatment from Nonghyup Bank by receiving loans with conspicuously low interest rates.

The National Assembly voted on the resolution to recommend Kim’s dismissal after midnight Friday, and the opposition parties clearly demonstrated their power of majority. Lawmakers of the Saenuri Party left the chamber in protest. Of the 300-member National Assembly, 170 opposition and independent lawmakers cast ballots and 160 voted for it. Seven opposed and three abstained.

During Friday’s session, the Saenuri lawmakers, in cooperation with cabinet members including Prime Minister Hwang Kyo-ahn, tried to filibuster the opposition’s attempt to vote on the resolution. The government officials gave lengthy answers to the Saenuri questions to delay the vote.

The filibuster by the ministers ended after National Assembly Speaker Chung Sye-kyun declared the end of the Friday session and started a new session after midnight. The resolution to recommend Kim’s dismissal was quickly introduced and passed after Saenuri lawmakers left the floor.

“A resolution to recommend a minister’s dismissal is filed and approved when a minister’s inability to perform his job is revealed,” said a senior presidential aide. “It’s been less than three weeks since Kim took the office, and it makes no sense to demand the president fire him. The opposition parties clearly intend to weaken the administration in order to take an advantageous place in the next presidential election.”

During her meeting with ministers on Saturday, Park said she has no intentions to concede. “It is regretful that the resolution, which didn’t even fulfill the formality requirements, was passed at a time that the country is in a crisis,” Park said.

It is the first time in modern history that the president has rejected a resolution passed by the National Assembly to recommend the dismissal of a minister.

The main opposition Minjoo Party of Korea continued to pressure Park on Sunday to fire Kim. “The latest resolution was the sixth of its kind,” Rep. Woo Sang-ho, floor leader of the Minjoo Party, said Sunday. “And all of the five in the past were accepted by former presidents. Even the dictatorship of [Park’s late father] Park Chung Hee accepted it.”

Throughout Korea’s modern history, about 80 resolutions to demand dismissals of ministers have been introduced to the National Assembly, but only six were voted on and passed. Three ministers stepped down in 1955, 1969 and 1971 at the demand of the legislature. At the time, the resolutions were binding. The 1987 constitutional amendment reduced the power of the binding resolution to non-binding recommendations.

The Saenuri Party has said it will boycott legislative activities hosted by National Assembly Speaker Chung to protest his decision to allow the vote. The party also said it will ask the prosecution to investigate Chung on charges of abuse of power, claiming that his decision to declare a session after midnight Friday and allow the vote were illegal.