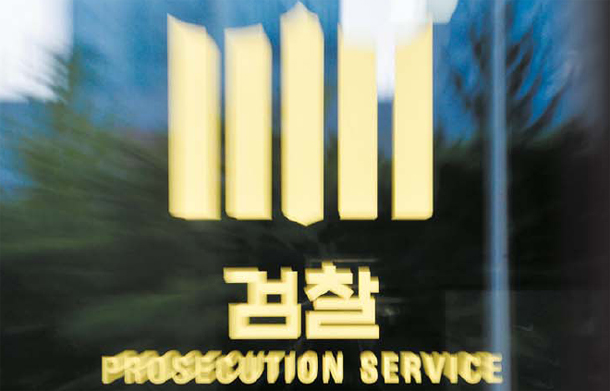 The emblem of the prosecution on the main entrance of the Seoul Central District Prosecutors’ Office in Seocho District, southern Seoul. [NEWSIS]

The prosecution is considered the most powerful authorized inspection agency in the country by 40 percent of the population, yet 90 percent doubts the fairness of its investigative procedures, according to a recent survey conducted by the JoongAng Ilbo.

A thousand adults across the country were asked by telephone on Aug. 24 and 25 whether they thought probes were affected by money or prosecutors’ personal connections, and 34.4 percent replied “very much so,” while 55.5 percent said “somewhat.” Only 1.2 percent answered “not at all.”

In analyzing the latest trend, local legal experts blame a handful of senior prosecutors who recently made news headlines for their involvement in bribery scandals, one of which ultimately led to Kim Soo-nam, the prosecutor general, issuing a grave apology to the general public earlier this year and vowing to internally reform his organization.

The apology was made shortly after Jin Kyung-joon became the first director-level official in the Korean prosecution’s 68-year history to be dismissed, the highest-level of punishment available, after an ongoing probe revealed he had received 950 million won ($851,979) in bribes from Nexon’s co-founder, Kim Jung-ju.

As to how much respondents actually trust prosecutors, on a scale of one to 10, 70.4 percent gave a rating of five or below. Only 2.4 percent offered the highest score. The average grade was around 4.4.

“Several former and current prosecutors were suspected of corruption,” said Moon Young-sik, a professor at the University of Seoul Law School, “and the media extensively covered each of them, one after another, since early this year.”

Moon added, “The survey result seems to portray just how much people are disappointed.”

Jeong Seung-hwan, a professor at Korea University School of Law, went on to say that locals would no longer fully trust the conclusions reached by prosecutors at the end of their investigations, especially when related to high-profile political issues or aides close to the president.

When asked whether a prominent political figure, including the president, appears to hold influence over the prosecution, 42.7 percent answered it was “very much so,” while 45.5 percent said “somewhat.”

Kim Kyung-soo, former director of the Daegu High Prosecutors’ Office, admitted in an interview with the JoongAng Ilbo that personal connections do come into play during prosecutors’ promotion season, and that those whose families are in a crucial social position tend to get better opportunities.

“I do think it was somewhat unreasonable,” said Kim. “Half of the process was fair, but the other half definitely needed to be improved.”

For years, opposition parties have been pushing to set up a special independent investigative body to prevent crimes and corruption by senior government officials, including prosecutors.

The idea was to downsize the authority of the prosecution by sharing its exclusive right of indictment with a separate body. That way, senior prosecutors would be closely monitored at all times, increasing the transparency of their work. But the plan, first introduced during the former Roh Moo-hyun presidency from 2003 to 2008, has made no progress so far. The ruling Saenuri Party fiercely opposes the power-sharing idea.

Earlier this month when Chung Sye-kyun, the National Assembly speaker, made his opening remarks to launch the first regular session of the 20th National Assembly and said, among other things, that an independent investigative body should be established once and for all, Saenuri lawmakers walked out in a show of protest.

Kim Hyun-woong, the justice minister, adamantly opposed the proposal last Wednesday in an interpellation session held at the Assembly, saying it would be a “waste” of the government’s budget, and could possibly infringe upon human rights.

The public seems to disagree.

In the same JoongAng Ilbo survey, 74.3 percent said they favored the idea of an independent investigative group, half (35 percent) of which answered that they “very much” approved of it. When asked whether the prosecution’s authority needed to be curtailed, 86.5 percent agreed.

“In many cases, when high-level government officials were under investigation,” said Kim Seon-su, a lawyer who used to work on judicial reform at the Blue House during the former Roh Moo-hyun administration, “prosecutors tried to hide and downsize the probe, or inflate it or hold a biased perspective during the case, misusing their authority.”

Kim added, “The public consensus supports the idea of a special independent investigative body. It’s about time it was approved in the National Assembly.”