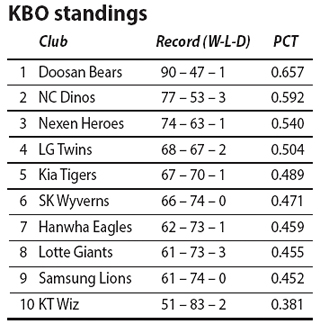 Against the bottom-ranked KT Wiz on Thursday, the Bears clinched a 9-2 win to take their 90th win of the season. The win also gave the Bears their first KBO regular season pennant in 21 years since 1995. After the win, the Bears will automatically make their way to this year’s Korean Series.

The Bears were essentially unchallenged in their top spot throughout the season. Ranked first since the beginning, they gave up first place only twice on Aug. 6 and Aug. 10. Right now, however, they stand ahead of the second-ranked Dinos by 9.5 games.

That being said, the game on Thursday against the Wiz didn’t turn out to be an easy win. Despite runners on the base, the Bears remained scoreless until the fifth inning. It was the Wiz that took the lead first at the top of the sixth. But as the Bears did throughout the season, the defending champs had another dramatic comeback.

Oh Jae-il belted a two-run homer at the bottom of the sixth to give the lead back to the Bears. With a fielding error, the Bears added another run before the inning came to its conclusion. Extending the hot-hitting momentum, by the eighth inning, the Bears were in the lead 8-1.

On the mound, Chang Won-jun started off the game for the Bears and despite giving out eight hits, he carded eight strikeouts and yielded only one run. Chang clinched his 15th win of the season and along with Dustin Nippert (21 wins), Michael Bowden (17) and Yoo Hee-kwan (15), the Bears now have four pitchers with more than 15 wins in a single season, a feat unmatched in the history of the KBO.

“Everyone did more than their share,” said Kim Tae-hyung, the manager of the Bears.

Before the season began, the pressure was high for the Bears, especially in batting, with the departure of Kim Hyun-soo to the Major Leagues. But then entered Park Kun-woo, Kim Jae-hwan and Oh to fill that void. In particular, Park, who had been a backup until last year, has been batting .338 for the Bears this year and made a leap to become a starter. Kim also enjoyed a successful season as a slugger, recording 36 home runs and 119 runs batted in. The depth of the Bears and slugging ability of the players were just a few of the ingredients that led the Bears to dominate the league. 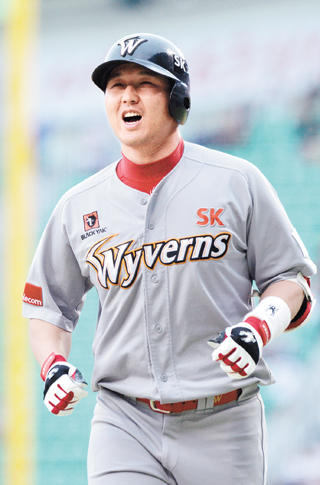 SK Wyvern’s infielder Choi Jeong was a different person in the second half of the season this year.

In the first half, Choi tallied 20 home runs. Despite this number, his batting average stayed at a meager .263. More disconcerting, he only batted .136 in scoring position. More than 60 percent of the homers in the first half came without a runner on the base.

If it was the same Choi as the past two seasons, the second half this year would have turned out more or less the same, whether by a continuous slump or injuries. But Choi this year is different. He has ratcheted up the numbers in the second half of the season to see what may be the second wind of his career.

In the second half, he more than made up for the struggle he was going through. Choi belted out 19 home runs while batting .328. His runs batted in (RBI) were the same as the first half, 50. The batting average in scoring position in the second half also witnessed drastic improvement at .500, or 19-for-38. He is also the first third baseman in the history of the Korea Baseball Organization to tally 100 RBI and 100 runs in a single season.

Trailing in home runs behind Eric Thames of the NC Dinos only by one, at 39 total this season, Choi hopes to take the title in the category over last year’s league MVP. “I don’t consider myself as a slugger,” he said. “I am already well beyond the goal I set for myself before the season, which was 30 home runs. I am still rather dumbfounded. I want to tally one more but I won’t think about it too much. I will just let it flow as it is.”

“I know I performed poorly in the first half,” Choi added. “I told myself to give everything I’ve got in every game and now here I am. I have never experienced this before.”

Choi has gone through a rough patch since he became a free agent two seasons ago. Injuries plagued Choi last season and suffering through them while being unable to even swing his bat was more painful than the injuries themselves, Choi says. “Above anything else, I need to stay healthy.”

“But I did gain confidence this year,” he added. “For the first time in my career, I learned I can endure anything.”

In the meantime, the Wyverns are currently ranked sixth in the league and hoping to make their final run in the next two weeks before the regular season comes to its end to gain a place in the postseason.