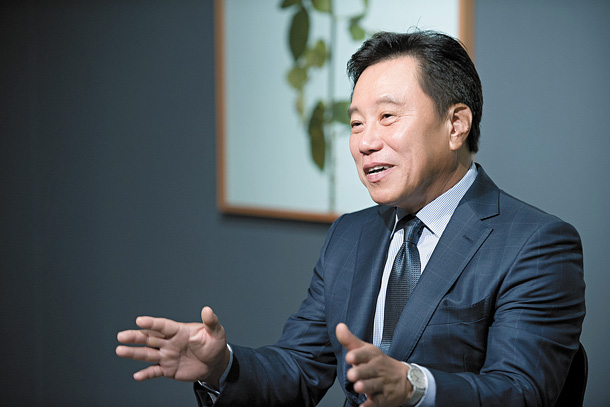 It may come as a surprise that Korea’s major coal trader Samtan is a major supporter of and heavily involved in Korea’s contemporary art world. But this resource and energy company is the master behind the high-end SongEun Art Space in Cheongdam-dong, southern Seoul. For the past 27 years, the company has been actively supporting young Korean artists by establishing the SongEun Art and Cultural Foundation.

When the late founder handed off the chairmanship of the company and the foundation to his son, he is said to have emphasized that “the company must continue to support young Korean artists, especially those breadwinners who suffer from financial hardships and consider abandoning the life of an artist as it makes no money to feed the family.”

“Song Eun was my father Yoo Sung-yeon’s pseudonym, which means ‘hidden pine tree’ in Korean,” said Yoo Sang-duck, 57, current chairman of Samtam and the SongEun Art and Cultural Foundation, who succeeded his father in business after his death in 1999 and continues to “support young Korean artists.”

Yoo said that the foundation is going to establish a new art space in Cheongdam-dong to “allow easier access to the public and a larger space for Korean artists.” Renowned Swiss architecture firm Herzog & de Meuron, known for designing the Beijing National Stadium for the 2008 Olympic Games and the new Tate Modern in London, will be designing the new art gallery for SongEun.

“When it’s completed in 2019, it will be the first building in Korea by Herzog & de Meuron,” said Yoo. “I’m so excited to see the outcome and I have no doubt that the building will be an attraction itself.”

A special exhibition is being held at the SongEun Art Space in Cheongdam-dong to celebrate Chairman Yoo Sang-duck receiving the Montblanc de la Culture Arts Patronage Award. Works of 14 artists who have been supported by the Songeun Art and Cultural Foundation are being displayed including works by artist Chung Hee-seung, left, Kim Juri, center, and Suki Seokyung Kang, right. The exhibition runs until Oct. 1. It is closed on Sundays and public holidays. [SONGEUN ART AND CULTURAL FOUNDATION AND THE ARTIST]

Although he calls himself a layman when it comes to art, Chairman Yoo has actively made efforts to carry on his father’s wish of supporting young artists. Through the cultural foundation, he established the SongEun Art Space in 2010 to provide space for young artists to exhibit their works while allowing the public to enjoy Korean contemporary art at no cost.

Yoo also initiated the annual SongEun Art Awards in 2001 to support and award artists through a “transparent evaluation process,” according to the foundation. So far, about 102 young Korean artists have been awarded and have received support through this program. In 2014, the foundation signed an MOU with London’s Delfina Foundation so that one of SongEun’s artists could experience the Delfina Foundation’s residency program for three months each year.

Since 1992, after establishing a cultural foundation, Montblanc has been gathering arts and culture experts from 10 countries worldwide to select individuals or representatives from businesses that have devoted their time, money and passion into supporting domestic arts and culture.

This year’s 12th edition of Montblanc de la Culture Arts Patronage Award in Korea honored Yoo at the SongEun Art Space on Thursday by handing him 15,000 euros ($16,738) in prize money as well as Montblanc Patron of Arts Edition fountain pens. Upon receiving the prize, Yoo said he’ll donate the money to the Delfina Foundation.

“We are honored to award Yoo who made tremendous contributions to support Korean artists and making contemporary art more accessible to the public,” said Sam Bardaouil, co-chairman of the Montblac Cultural Foundation.

To hear more about Yoo’s art patronage work, the Korea JoongAng Daily sat down with Yoo for an interview at the SongEun Art Space on Thursday. Here are some edited excerpts from the interview. 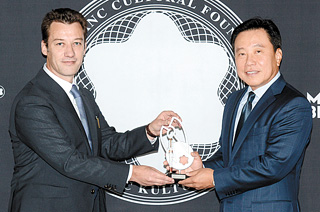 Q. You’ve always gave awards to artists. How does it feel to receive one yourself?

A. It’s such a big honor. Like my father, I’m kind of a quiet person who likes to do things without making much publicity. My father didn’t really like doing media interviews when there were requests. He thought it wasn’t necessary to let people know what we are doing to support Korean artists. My father was passionate about art. He wanted to become an artist but he couldn’t achieve his dream of becoming an artist because he was from a poor family. So when his business prospered, he delved right into supporting young Korean artists by establishing the foundation. I guess he didn’t want to see other young Koreans who are passionate about art like he was give up their dreams because of financial issues.

Back then, the foundation’s board of directors was all acquaintances of my father who were working in the arts and culture industry. So the support went to young artists who were recommended by these board of directors. I thought we needed to make things more transparent and fair and let everyone, even though they don’t have any connections or relationships to anyone with power, have the opportunity to receive support if they have the talent. That’s how the Arts Award was established.

Were there any memorable moments while supporting artists?

I received a long handwritten letter about 10 years ago from an oriental painter named Dukki Kim, who is now with Gallery Hyundai. Back then, the Arts Award wasn’t established so only recommended young artists could receive the support. In this letter, he said that he’s a young passionate artist and a son of a poor farmer in Yeoju, Gyeonggi.

He said when he was growing up, his family was so poor that his parents couldn’t afford to buy him paints and that he had to use left over paints of his friends that had hardened. He said he was still struggling financially and that he couldn’t hold exhibitions abroad even though he was invited because he didn’t have the money to buy materials and frames to hang his paintings. I decided to support him without approval from the board of directors and that’s when I realized that the support needs to be available for everybody.

To celebrate, the SongEun Art Space organized a special exhibition. What is it about?

From Sept. 23 to Oct. 1, there will be a special exhibition exhibiting works by 14 artists who were supported by the foundation. Korean artists like Chung Hee-seung, Choi Sun, Suki Seokyung Kang among others are exhibiting their works as well as Argentine artist Leandro Erlich who presented his first solo exhibition here as well.