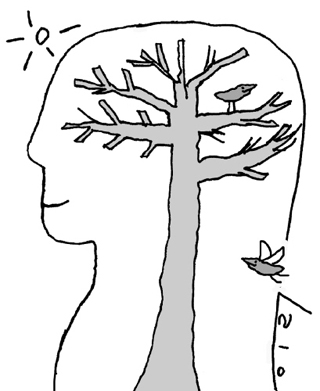 One day, the Chinese Chan Master Dong-shan was getting ready to leave on a pilgrimage. He prostrated himself before his teacher, Chan Master Yun-yan, and sitting on his knees he asked him, “Master, after you pass away, what should I say if someone asks me to draw your funeral portrait?”

His teacher answered, “I would tell them ‘Only this! Only this!’”

One day Dong-shan came upon a small stream that cut across the road on which he was traveling. He began to cross the gurgling stream when suddenly he looked down and saw his own reflection in the water. At that moment, Dong-shan had a great awakening and composed the famous poem “Flowing Stream” which begins with the lines:
Don’t seek anything externally.

The more you do, the further you get from enlightenment.

It was quite rude of him, wasn’t it, when he asked his teacher about his funeral portrait! Dong-shan tossed out some really provocative questions — “Master, what did your enlightenment look like? Show me right now!” The give and take of Chan style Dharma combat is terribly ruthless — even between master and disciple.

What does the phrase “Only this! Only this!” mean? A while ago on television I saw a Dharma talk on the Diamond Sutra given by the American monk Hyon-Gak, author of the book “Pilgrimage: From Harvard to Hwa-Gae Temple.” He picked up his keisaku (a wooden stick used to keep meditators alert) and struck the rostrum with a loud whack. As the audience sat in silence he shouted, “Only this! Shhhhh!” and closed his eyes. The wind-bells hanging from the eaves of the Buddha Hall could be heard softly chiming, “Clang! Clang!” Hyon-Gak then shouted, “That sound!

This is it! The more I say, the farther it gets from the point.” Of course, Chan Master Yun-yan’s “this” and Hyon Gak’s “this” are connected. “This” points to the sound of the wind-chimes coming from the eaves that was heard by everyone at the same time and place. Why should the sound mean something to one person and another thing to someone else?

The key to resolving this question is — Who heard them? What kind of mind heard them? When you are sad, the sound of the wind-chimes is completely filled with sadness. When you are happy, the sound of the wind-chimes is filled with happiness. Of course, it’s not the sound itself which is happy or sad, it’s our mind. That’s right — our mind is happy or our mind is sad.

What is the sound of the wind-chimes when we let go of our happiness and sadness? What do the wind-chimes sound like when our mind is completely free from happiness, sadness, anger or joy? This is it!!

What kind of mind heard that?