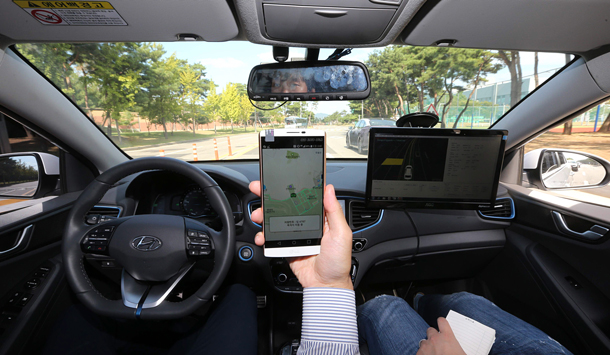 A test run of a self-driving car produced by Hyundai Motor Group on Sept. 20. [KIM SANG-SEON]

Self-driving cars got a green light from the U.S. government this week, but still have their own challenges: erratic human drivers, compromised visibility, unexpected route changes. Here’s one they won’t face until they catch on: zoning.

As soon as self-driving cars are readily available, proponents will run into political battles over land use, a challenge familiar to urbanism advocates. These proponents have a compelling vision to reduce traffic-related injuries and lower transportation costs. They also aim to cut car ownership and repurpose parking spaces and garages. That’s where the conflict begins.

After all, transportation is a unique need. When you order a book on Amazon, you can wait a day or two for it to arrive from a distribution center in another state. But a customer summoning a self-driving car would expect to wait only 5 to 10 minutes for it to arrive. One way that companies could meet this expectation is by stationing fleets of vehicles within a 5 to 10 minute drive of almost every residential neighborhood in the country.

To neighborhood preservationists, this will represent the biggest threat to community character since the building of the interstate highways in the middle of the 20th century.

What kind of space will this require? Let’s take Palo Alto, Calif., for an example. The U.S. has a population of 324 million and a vehicle fleet of 253 million, for a person-to-vehicle ratio of 1.3. Palo Alto has a population of around 67,000, so using a person to vehicle ratio of 1.3 would mean a transportation system for Palo Alto might have to manage 50,000 vehicles. A standard parking space is 18 feet by 9 feet, or 162 square feet. That means storage space for 50,000 vehicles could be as high as 8.1 million square feet, or 3 Empire State Buildings. This could be challenging in politically active communities accustomed to fighting second stories on houses, new cell phone towers, and construction of any kind.

A key question is if this ratio of 1.3 is a reasonable estimate in a self-driving world. Many cars are parked most of the day, and self-driving technology could enable more pooled rides than we see today. On the other hand, when something gets cheaper more of it is typically demanded. So readily-available self-driving vehicles could lead to a surge in demand, particularly at peak times, offsetting the efficiency of eliminating private vehicles.

Another possible solution would be having vehicles endlessly circle communities waiting for fares, reducing the need for storage, but here there will be problems as well. Because such a transportation system will require constant centralized monitoring, it will make regulating such a system much easier than it is today. Right now, if cab drivers want to circle the streets looking for a fare, there’s no way or political will to stop them. But it’s easy to imagine local communities deciding that unattended self-driving car fleets aren’t allowed to enter residential neighborhoods unless they have a pre-existing fare.

It’s also easy to imagine heavy restrictions on “idling” on major thoroughfares as well, both as a way of managing congestion and preventing behaviors like “robot vehicle billboard spam,” where companies would operate vehicles for the sole purpose of marketing themselves on major roads.

The final battle, should the first two problems be solved, will be about how to repurpose street parking and garages, especially in single-family residential neighborhoods. With street parking, some will argue that streets should be narrowed and sidewalks and paths widened, allowing for a better pedestrian experience and more cycling. Others will argue for increasing the percentage of land that can be built upon, at which point the nimby activists will rise up to shout “not in my backyard.”

Most of these fights will be more intense in wealthy, higher-density communities, where land use and fights over it are already more intense, and where many of the would-be early adopters of self-driving cars live. Those moneyed interests have a lot to hash out before fleets of robot cars will roam every American community.


*The author is a portfolio manager for New River Investments in Atlanta.