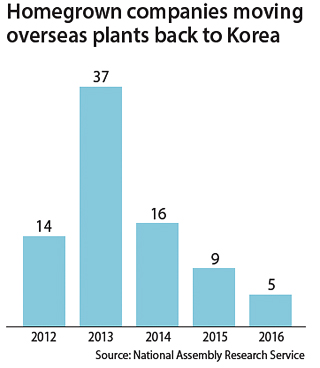 Korean companies that have moved their overseas operations back to Korea have significantly declined since 2013. In fact, that figure is expected to get smaller this year as government policies to entice homegrown businesses to move here are less than appealing. High-income demands and powerful labor unions are major obstacles.

The number of Korean companies that moved back to their home country has significantly dropped, from 37 in 2013 to nine last year, according to Minjoo party lawmaker Kim Kyoung-soo. This year, the number has fallen to five so far.

The study was based on data provided by the Ministry of Trade, Industry and Energy and the National Assembly Research Service.

LG Electronics was the only conglomerate that moved its overseas plants back to Korea between 2014 and 2016. The Korean electronics company moved part of its washing machine production line in Monterrey, Mexico, back to its plants in Changwon, South Gyeongsang in June this year.

Although Mexico has lower labor costs, LG reportedly decided to move operations home due to low productivity. Productivity at LG plants in Mexico is only 50 percent of the productivity of LG’s Korean plant and 70 percent of to the LG plant in Thailand.

LG Electronics, which has the largest global market share in washing machines, has plants in South Thailand, Gyeongsang, China and Mexico where it produces between 13 million and 14 million machines a year.

Kim said the lack of government policies that would trigger Korean companies to bring back some of its overseas operations back home.

Between 2012 and 2015, 35 companies received 20.2 billion won ($18.24 million) to relocate and rebuild production lines in Korea. However, other than the 100 million won custom tax cut there were no additional supports including reduction on corporate taxes or income taxes.

“Other advanced economies are adopting more aggressive policies targeted at expanding hiring and investments, including the returning of its overseas manufacturing plants,” said Kim of the Minjoo Party. “In response [to such government policies] many global companies are relocating back to their home countries.

In order to encourage Korean companies, including their suppliers, to return back to Korea, the government has to provide much stronger policies, such as allowing these companies to relocate within the free trade zones and expand their incentives.”

A similar claim was made by the Korea Economic Research Institute in July. The think tank claimed that in the last six years the accumulated direct overseas investments by Korean companies from relocating plants in the greater Seoul area to other countries amounted to $122.7 billion, which is nearly triple the foreign direct investment of $46.9 billion made in Korea. The research institute noted that many Korean companies were leaving the country, especially in the greater Seoul area, and building plants elsewhere because of heavy regulation by the government.

The government, in hopes of encouraging more Korean companies to relocate back to Korea, has lowered the barriers on the size of companies that will receive tax benefits when relocating operations to Korea.

Previously the tax benefits were limited to small- and medium-sized companies, but in the tax reform bill proposed by the government in July, the government has included medium size companies that are bigger than SMEs but smaller than conglomerates.