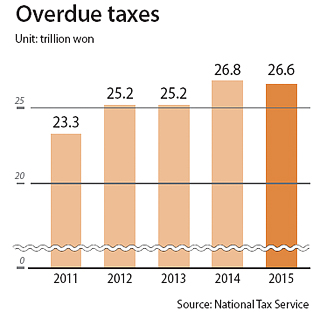 Seoul’s three wealthiest neighborhoods were a little stingy when it came to paying taxes.

Although the amount owed by the three Gangnam districts - Gangnam, Seocho and Songpa- shrank compared to the previous year, overdue taxes in these neighborhoods still accounted for a substantial amount.

The overdue taxes in the three areas amounted to nearly 3.7 trillion won ($3.3 billion) in 2015, according to a report by the opposition Minjoo Party lawmaker Kim Hyun-mi. The report was based on data from the National Tax Service. This is a near seven percent decrease compared to the 4 trillion won in overdue taxes in 2014.

Although the amount has decreased, Kim said the fact that 43.9 percent of the overdue taxes came from three districts in Gangnam alone out of 25 districts in the nation’s capital was exceptionally high.

“What’s more worrying is that the taxes that were recovered from these three districts compared to their overall overdue taxes were much lower,” Kim said.

The tax agency was able to collect 34.6 percent of the overall taxes owed by the 22 districts in Seoul. For the three districts in Gangnam that figure drops to 27 percent.

The top ranking for overdue taxes collected went to Gwangju, which amounted to 45.6 percent followed by Daegu with 44.3 percent and Busan with 42.3 percent.

The report noted that in the last five years overdue taxes have hit 127.2 trillion won. Such unpaid taxes last year alone have amounted to nearly 26.6 trillion won, although this is a slight decline of 0.7 percent compared to 26.8 trillion won in 2014.