Country climbs in ranks of per capita assets

Country climbs in ranks of per capita assets 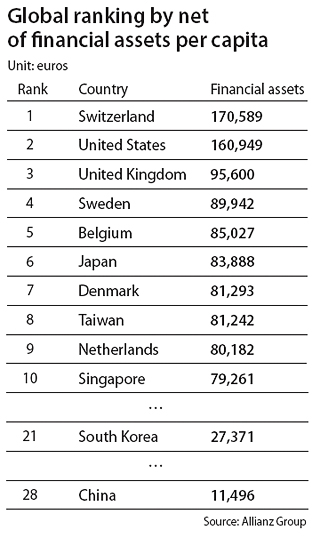 The country ranked 21st among 53 countries and fifth among Asian nations in terms of financial assets per capita in 2015, according to the Global Wealth Report released by German insurer Allianz Group.

Switzerland topped the list with net financial assets per capita of 170,589 euros and the United States followed with 160,949 euros. Among Asian countries, Japan came first with 83,888 euros and ranked sixth globally, moving up from eighth place.

Regarding gross financial assets per capita, including liability, Korea was unchanged compared to last year at 22nd among 53 countries and fifth in Asia at 49,580 euros.

Singapore posted the largest gross financial assets per capita among Asian countries with 114,155 euros, ranking eighth globally. Japan came in 10th with 108,660 euros and Taiwan was 12th with 99,257 euros.

Regarding the growth rate of gross financial assets, Korea had a 9.6 percent increase year-on-year and was one of the two countries in Asia, along with Japan, whose annual growth rate surpassed the 10-year average. First place went to China, which achieved an annual growth of 18.3 percent, although it fell from 2014’s 20.4 percent.

The report mentioned Korea as the country whose debt growth rate rose the fastest, from 6.3 percent in 2014 to 9.8 percent last year. Among Asian countries, its debt growth rate was third, following India which had 17.5 percent and China with 16.8 percent.

“Korea’s liability per capita was 22,209 euros and came third among Asian countries, following Singapore with 34,894 euros and Japan with 24,772 euros,” the report said. “This accounts for 12 percent of the Asia’s regional total of household debts.”