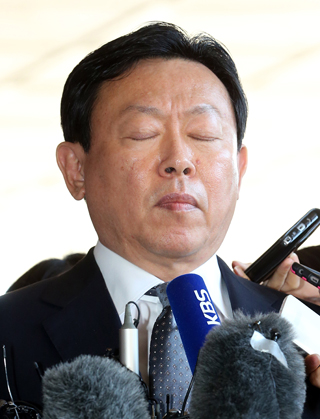 Prosecutors on Monday requested a pretrial detention warrant for Lotte Group Chairman Shin Dong-bin, six days after they summoned the head of the retail giant for embezzlement and corporate malpractice allegations that amount to 170 billion won ($153 million).

“We are sorry to hear the prosecution requested an arrest warrant for Shin,” said the Lotte Group’s public relations department. “The group will answer to its best at the trial to determine necessity of an arrest warrant and wait upon the judgment of the court.”

Shin’s trial, to determine the eligibility of a detention warrant, will be held on Wednesday at the Seoul Central District Court.

The 61-year-old chairman of Lotte Group is the highest-level executive to be investigated by the prosecution since it opened the probe about 100 days ago, marking the first time that Lotte became a target of a large-scale prosecution probe since its founding in 1967.

Shin was summoned by prosecutors on Sept. 20 over questions concerning his role in the retail giant’s tax evasion, embezzlement, slush fund operation and other forms of corporate malpractice. He reportedly denied most of the charges.

Shin, in allegedly making decisions that favored companies doing business directly with members of the owner family, is accused of inflicting more than 100 billion won cost on the affiliates of Lotte Group.

The prosecution said Shin also faces embezzlement charges for having received about 10 billion won in annual income after listing himself as a director of a Lotte affiliate in Japan without providing any services.

In addition, the prosecution suspects Shin was aware of Lotte Chemical’s tax fraud. The company manipulated its accounting records and received about 27 billion won in tax rebates from the government. Shin was the CEO of Lotte Chemical at the time.

Shin is also accused of being involved in the group’s creation and operation of slush funds. The conglomerate is accused of running slush funds worth some 30 billion won at Lotte Engineering and Construction.

In total, the business malpractices are estimated to be about 170 billion won, the prosecution said.

Prosecutors said they requested the detention warrant given the weight and seriousness of Shin’s charges, despite worries in financial circles that Shin’s possible detainment may stage blows to the national economy. Lotte Group is the country’s fifth-largest conglomerate.

“Prosecutors made the decision keeping in mind the general effect the decision may inflict on society,” said a prosecution official, “but in the end we decided to follow the investigation team’s decision [to request a detention warrant].”

Should the court deny the prosecution’s request, the probe into Shin and Lotte Group may hit a wall. The probe received media attention for months, which peaked after the death of the group’s vice chairman, Lee In-won, on the morning of his summons to the prosecution. The death was later determined to be a suicide.

Shin Kyuk-ho’s third wife Seo Mi-kyung, who is accused of receiving Lotte Holdings shares from the group’s founder without paying taxes, has not responded to the prosecution’s request to come to Korea for investigation. Prosecutors said they may be indicting her sans summons.