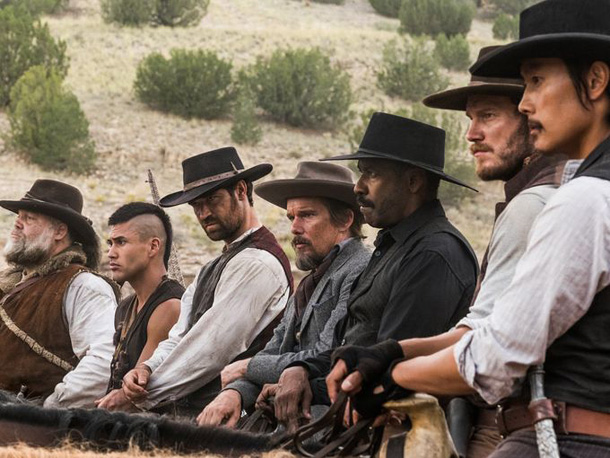 The Hollywood remake of “The Magnificent Seven” came in third in the Korean box office over the weekend after “The Age of Shadows,” which has held the top spot for third weeks, and “Ben-Hur.” [UPI KOREA]

The period spy film “The Age of Shadows” reigned at the top spot for the third consecutive week over the weekend, according to Korean Film Council on Monday.

For three days from Friday to Sunday, the historical movie raked in more than 3.8 billion won at 1,105 screens nationwide by selling 459,048 tickets, making up 38.6 percent of total sales.

Directed by Kim Jee-woon and starring A-list actors, including Song Kang-ho and Gong Yoo, the accumulated ticket sales for the flick is closing in on a total of seven million.

The second and the third spots went to the Hollywood remakes of “Ben-Hur” and “The Magnificent Seven.”

Over the weekend, 191,625 moviegoers, most of whom were above 30, chose the classic remake “Ben-Hur,” which has accumulated more than 1.2 million tickets sold since its release on Sept. 14.

The western action movie “The Magnificent Seven,” which debuted on the same day as “Ben-Hur,” was seen by 104,796 people over the three days, bringing total ticket sales of the film to 879,975.

A Japanese zombie blockbuster came in fourth in its first weekend. “I’m a Hero,” based on a cartoon that thoroughly depicts how grotesque zombies attack humans and vice versa, sold 100,686 tickets over the weekend. The Japanese zombie flick is a dark zombie thriller filled with violent action scenes. CJ Entertainment’s period film, “The Map Against the World,” about Joseon Dynasty (1392-1910) cartographer Kim Jeong-ho (Cha Seung-won) dropped again this week to fifth place from the fourth last weekend.