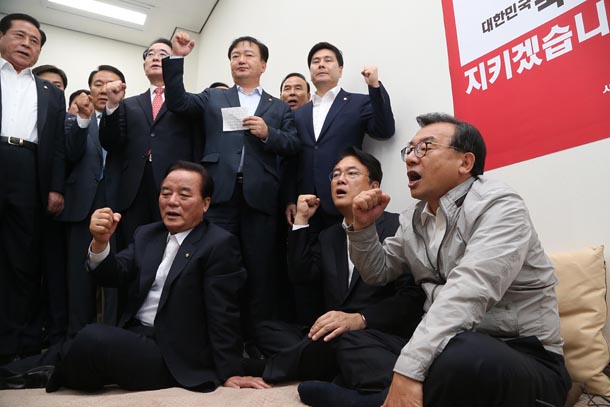 Challenging the integrity of the National Assembly speaker, the chairman of the ruling Saenuri Party started a hunger strike Monday to demand his resignation and its lawmakers boycotted all scheduled legislative activities on the first day of the Assembly’s government audit.

Saenuri Chairman Lee Jung-hyun started the hunger strike in the afternoon at the National Assembly, condemning the opposition parties for having used their majority to pass a resolution to demand the dismissal of a new agricultural minister.

“I will demonstrate my strong will until the National Assembly Speaker Chung Sye-kyun steps down,” Lee said, challenging the integrity of the voting process and Chung’s political neutrality.

While the Saenuri lawmakers left the floor to protest the voting, 170 lawmakers from the opposition Minjoo Party of Korea, People’s Party and Justice Party and independent representatives attended the vote and passed the resolution.

While Park made it clear that she will veto the request, the Saenuri Party fiercely attacked Chung for having arranged the vote. Chung stopped the filibuster of the Saenuri Party and cabinet ministers around midnight, declared a new session and allowed the vote early Saturday.

Chung, a sixth-term lawmaker of the Minjoo Party, gave up his party affiliation after he was appointed as the speaker in order to ensure political neutrality. Lee and the Saenuri Party, however, said Chung had clearly violated his duty to remain neutral, citing a recording of his conversation with a Minjoo lawmaker before the controversial vote.

“I told them to present anything, but it’s not working,” Chung said in the recording. “I told them to make a choice to concede between [a hearing on] the Korea Parent Federation or [extension of the special investigation committee into] the Sewol ferry’s sinking, but they won’t budge. Well, nothing comes free.”

The opposition parties have demanded an extension of a special investigation into the 2014 sinking of the Sewol ferry and a hearing into the Korea Parent Federation scandal, in which the Blue House was accused of ordering the conservative group to stage pro-government demonstrations, while the largest business lobby, Federation of Korean Industries, funded them.

The ruling party has rejected both demands over the past months.

Chung apparently spoke while the microphone was on at the speaker’s podium during the chaotic session to stage the vote. “Chung was demanding that we concede on one of the demands in return for scrapping the vote on the resolution,” a Saenuri official said. “It shows that Chung already made a deal with the opposition to push forward its demands, if no vote takes place on the resolution. This is a breach of his duty to remain neutral.”

After obtaining the record, the Saenuri Party held a meeting of its lawmakers and discussed its next move throughout Sunday night.

“Just because we don’t agree to extend the Sewol investigation and hold a hearing on the Korea Parent Federation, Chung and the opposition lawmakers committed the violence against flawless Minister Kim,” Rep. Kim Jung-jae, spokesman of the Saenuri Party, said. “In his speech to open the 20th National Assembly, Chung overly represented the views of the opposition. Now, he acted as a tool of the opposition parties’ political dealing. He is no longer fit to serve as the speaker, so he must immediately resign.”

Chung dismissed the attacks. In a statement released by his office, Chung said he was merely expressing regret that the ruling and opposition parties failed to compromise and the resolution was forced to be voted.

He said he continuously tried to persuade the floor leaders of the ruling and opposition parties to reach a compromise from the day of the resolution’s submission until the voting day.

He also told Yonhap News Agency that he did try to broker the situation. “The opposition parties already submitted the resolution, so they needed something to save face to recant it,” he said. “But the Saenuri Party didn’t budge, so there was no room for negotiation. I just wanted the ruling and opposition parties to negotiate and resolve the situation.”

The resolution to recommend Park to dismiss Kim was sponsored by the main opposition Minjoo Party and the Justice Party. The People’s Party did not participate, although some of its lawmakers apparently supported it at the voting.