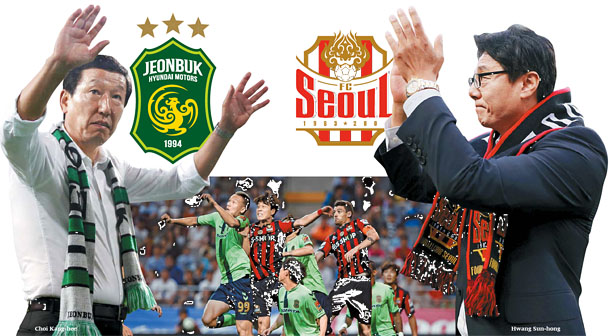 This year’s Asian Champions League (ACL) is in the semifinal stage already, and as fate would have it, the semis this year in the East zone have turned out to be a matchup between two rival Korean clubs. Of course, for FC Seoul, who is 0-for-3 against Jeonbuk Hyundai Motors this year in the K-League, today’s first-leg match comes as an opportunity to get their revenge. Jeonbuk, on the other hand, hopes to extend their unbeaten record against Seoul through today’s outing.

Seoul and Jeonbuk took down big-spending Chinese clubs in the quarters. But that was just a preview of what lies in store for fans in the semis. Indeed, the ACL semifinal for the East zone will literally be the battle of Korea since the first and second leg of the match will take place in Korea. Today’s match between the two will be played at Jeonbuk’s home, the Jeonju World Cup Stadium in Jeonju, North Jeolla. Jeonbuk then will travel to Seoul for the second game at Seoul World Cup Stadium, which is slated for Oct. 19.

Unlike the K-League Classic season matches, Seoul and Jeonbuk have nowhere to retreat, as it will only take two games to decide who advances to the ACL final and possibly becomes the football champions of Asia.

Since the onset of the season, Jeonbuk had their eyes set on the ACL title, which has evaded the green-outfit since 2006. Choi Kang-hee, the skipper of Jeonbuk, said, “The outcome of the ACL last season (quarterfinal finish) was the most disappointing of everything from last season. The triple crown is a worthy goal, but gaining back our edge in the ACL is a must.”

His eagerness gained momentum with the support of the club. He wanted to bring the big guns in for the ACL, and the club answered. As a result, Jeonbuk reeled in big names both in and outside Korea and stars such as Kim Shin-wook, Ricardo Lopes, Kim Bo-kyung and Lee Jong-ho donned the green. And the recruiting spree paid off. By the end of the transfer window, Jeonbuk had so much depth to its roster that Choi could form two evenly capable starting lineups.

He knew all along that Seoul would be waiting at the end of the road, and he made some changes to the lineup for the league games against Jeju United FC on September 21 and against Seongnam FC on Saturday. Jeonbuk starters are well-rested, thanks to their skipper, and for this reason, their morale going into today’s game is as high as ever.

But if Jeonbuk is going into today’s game with confidence based on past records, Seoul is going in with determination to avenge their losses. This was apparent when Hwang Sun-hong, Seoul’s skipper, was spotted in the stadium when Jeonbuk took on Seongnam last week. As Sun Tzu said, “If you know the enemy and know yourself, you need not fear the result of a hundred battles.” Indeed, after the painful losses, Hwang’s been doing his homework, trying to get to know his players after joining the team mid-season, as well as grasp the tactics of Jeonbuk in preparation for the ACL semis.

At 0-3 record vis-a-vis Jeonbuk, Seoul is in the inferior position. After Choi Yong-soo tendered his resignation to oversee Jiangsu Suning FC of Chinese Super League, Hwang came aboard in late June. The sudden change in leadership led to a brief slide, and it took some time for Hwang’s meticulous and possessive style of play to fuse into Seoul’s offense-center game. While this was going on, Hwang and Seoul met Choi and Jeonbuk twice, losing both games, largely due to lack of cohesiveness in the game.

But Hwang said, “You never know how things are going to turn out in football.” Indeed, things are different for Seoul, as demonstrated in the ACL quarters. Against Shandong Luneng FC, led by former Bayern Munich manager Felix Magath and Brazilian forward Diego Tardelli, Seoul came out with a 3-1 win and 1-1 tie during the two matches, paving its way to the semis. Yet mentioning Carlos Adriano, who leads ACL in scoring with 12 goals, is superfluous at this point since FC Seoul’s offensive prowess has been well documented over the season.

“I will think of the first leg match as the first half of the entire match,” said Hwang. “We need to look as far as the second match as well.”