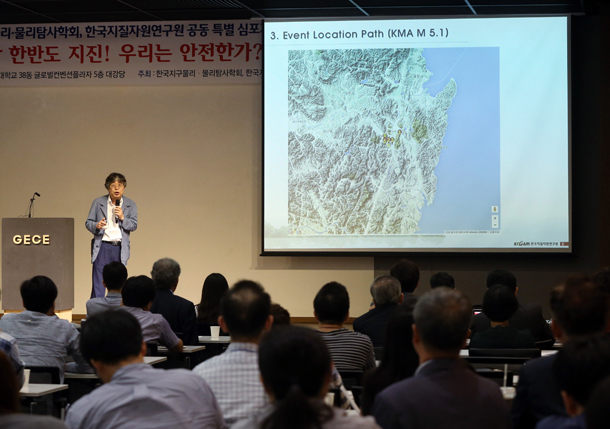 The successive run of tremors in the aftermath of powerful earthquakes in the southeastern region surrounding Gyeongju, North Gyeongsang, was a rude awakening that the Korean peninsula is not a quake-safe zone.

The incidents underscore that Korea is pretty helpless against a powerful earthquake. It doesn’t even have a proper alarm system. Broadcaster KBS went on with the regular airing of a drama even as a 5.8-magnitude quake shook Gyeongju and much of the southern coast. Such a laid-back system is unthinkable in neighboring Japan. The national safety authority, which sends off universal text messages advising people to refrain from outside activities when the air turns bad with fine dust, did not bother to warn the public of a major quake.

It shows how ignorant and casual we have been about seismic risks and dangers. An earthquake not only kills people but it can shake the root of a nation.

Japan provides a living example. Once the world’s second largest economy, Japan has been rocked by 12 rounds of earthquakes since 1960, including the recent mega-scale 2011 quakes that wiped out most of the eastern coast. The 7.3-magnitude quake in Kobe in 1995 claimed 6,434 lives and cost the country 10 trillion yen ($99 billion) for rebuilding and compensations. The magnitude 9.0 super quake in 2011 that killed more than 20,000 people cost the country an estimated 25 trillion yen. The tsunami that accompanied the quake ruined the nuclear reactor complex in Fukushima and led to radioactivity leaks that halted the country’s 43 nuclear reactors for two years. The government had to rely on much more expansive crude imports to power the nation.

South Korea is about a fourth the size of Japan. Such small land produces shipments that are the world’s seventh largest. Since the land is packed with producing facilities, any seismic shakes of more than six-magnitude scale could wreck havoc on the national economy. Readiness for earthquakes has the stake of public lives as well as the entire economy.

The 555-meter (1,821-feet)-tall Lotte World Tower was undisturbed by the recent power quakes in Gyeongju. The building is said to have registered about 1-scale minor shake for 10 seconds as it has been built to withstand up to a 9-magnitude seismic shock.

But it would be a different story if tremors were triggered by the Okcheon fault that is 150 kilometers (93 miles) away from Seoul instead of the Yangsan fault just 300 kilometers away that caused the recent quakes. Even if the buildings withstand, the shakes in the upper part of the tower could rock the interior and cause unpredictable collapses and casualties. The fear people feel in high-rises from shakes is unmatchable from the tremors on ground level.

Earthquakes do have positive effects. Japan made fast advances in engineering and other technologies because it had to adapt to a quake-prone environment. All builders are obliged to consider quakes when constructing residential, office and industrial buildings. Technology finesse and precision has enhanced and added value to the economy. It is why Japanese structures and products are deemed so reliable. It is also how the country can safely put up super-high skyscrapers regardless of quake dangers.

It would be a costly project as just 6.8 percent of the country’s architectural structures are currently fitted with quake protections. But the cost for safety would bring about a bigger value and returns to the economy in the long run, including the creation of new jobs.

Most imperative is the reinforcement in safety of nuclear reactors. If nuclear reactors stop, so would the Korean economy. The powerful quakes in Gyeongju should become a tipping point to a safer and reliable nation.