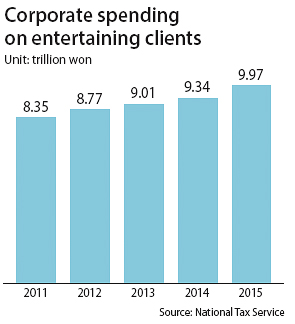 One-third of the spending on entertaining business partners and clients was made by the top 1 percent of conglomerates, according to a report released by Minjoo Party lawmaker Kim Jong-min on Tuesday.

The spending includes purchases at nightclubs, dinner theaters and room salons, or hostess bars, which may include prostitution.

When expanded to the top 10 percent of companies, spending totals 6.05 trillion won, or 60 percent of entertainment spending.

In total 591,694 companies that reported such spending to the national tax agency amounted to nearly 1 billion won. This is a 6.8 percent increase compared to the previous year and the biggest year-on-year increase since 2011, when spending grew 9 percent. Spending is up 19 percent compared to five years ago.

However, fewer are using corporate credit cards for entertainment. In tax filings, companies reported charging 1.14 trillion won on corporate cards. That’s 3.4 percent less than the 1.18 trillion won they charged in 2014. The study also showed that most of the card spending was at room salons.

“It is not right for such spending to be huge considering that such entertainment has little to do with business and is unproductive,” Kim said. “Such entertainment spending is expected to shrink in the public sector with the antigraft law being enacted. [The spending on entertainment] should be used for more productive purposes such as providing incentives [to employees] or used in invigorating corporate activities.”