China may soon have a seat at the Fifa council

China may soon have a seat at the Fifa council 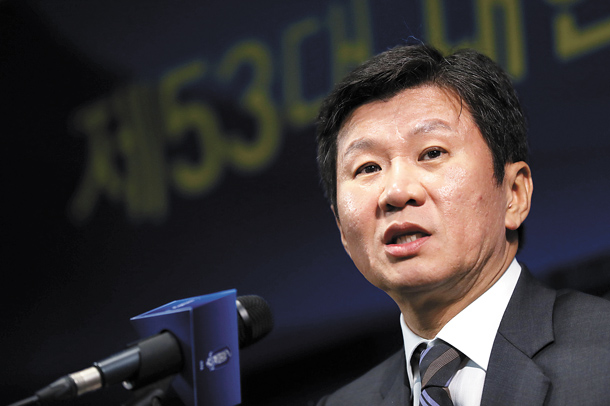 Chung Mong-gyu, the president of the Korea Football Association, has been appointed as one of the vice presidents of the Asian Football Confederation. [KFA]

SEOUL, South Korea - The influence of China in world soccer could increase if high-ranking Chinese official Zhang Jian is elected to the Fifa Council.

The Asian Football Confederation (AFC) is holding an extraordinary congress to elect three representatives to Fifa’s new decision-making body, which has replaced the scandal-hit executive committee. The date of the election has not yet been announced.

The chances of Zhang, the vice-president and secretary general of the Chinese Football Association, increased on Sunday when his biggest rival, Saoud A. Aziz Al-Mohannadi of Qatar, was barred from running.

In a statement, the AFC said “Fifa has advised the AFC that, based on the report of the Investigatory Chamber of the Fifa Ethics Committee, it has decided Mr Saoud A.Aziz Al-Mohannadi (Qatar) is not eligible to stand in the elections for the Fifa Council.”

Al-Mohannadi has been charged by the Ethics Committee with refusing to co-operate with an inquiry. While details of specific accusations have yet to be released, Fifa has said it is not related to Qatar’s hosting of the 2022 World Cup.

The ruling leaves Zhang running against Iran’s Ali Kafashian and Zainudin Nordin of Singapore for two of the three seats.

Zhang has played a major role in the development of Chinese soccer and planning extensive reforms that aim to make the country, a traditional underachiever in soccer, a world power by 2050.

This has come at the same time as the recent and massive surge of investment in the Chinese Super League on famous foreign players such as Hulk, Alex Teixeira and Jackson Martinez and coaches Luiz Felipe Scolari and Manuel Pellegrini.

“Although it is a case of the sooner the better, we will aim to do so at the right time,” Zhang said. “It seems that around 2030 or 2034 will provide a good opportunity for China.”

The third seat on the Fifa Council has been reserved for female candidates. Moya Dodd, a former Australian international and member of the now-defunct Fifa executive committee from 2013 to 2016, is running against Han Un-gyong of North Korea and Bangladesh’s Mafuza Akhter.

“I am doing my best to persuade the 45 voting members of Asia that I can be strong and part of a united AFC team working in Fifa,” Dodd told The Associated Press. “It is important that Asia puts its strongest team forward in Fifa as there will be a lot of issues coming such as discussions about whether to expand to a 40-team World Cup.”

The three successful candidates will take their places on the 37-member Fifa Council alongside existing AFC members from Japan, Kuwait, Malaysia as well as President Shaikh Salman bin Ebrahim Al Khalifa of Bahrain.

Also ahead of the election, the AFC confirmed that South Korea’s Chung Mong-gyu had succeeded Zhang Jilong of China as the East Zone AFC Vice-President.

Zhang, who stepped down for health reasons, was the acting president of the AFC following the suspension of Mohamed bin Hammam from football activities by the Fifa Ethics Committee in May 2011 as he ran for the post of Fifa President. Shaikh Salman was elected president in May 2013.