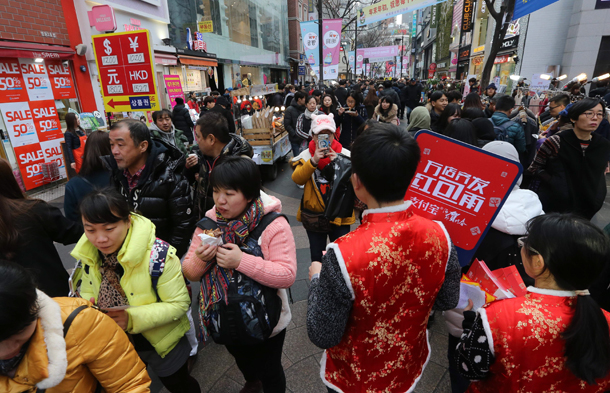 In late 2014, a 40-something Chinese tourist from the mainland made a stir in Taiwan. He had entered the restricted area of Chunghwa Telecom, the island’s largest communications provider, and took photos of various equipment, which he then shared on social media. He bragged that they were confidential pieces of equipment that he had photographed at an intelligence agency.

It turned out that a company employee he met in the mainland had guided him. While the exposed machines weren’t secret equipment, Taiwanese people were angry at the rudeness of tourists from the mainland.

Mainland Chinese tourists began traveling to Taiwan in 2008. As the number of visitors exploded, the Taiwanese people’s hatred toward mainland Chinese deepened. Visitors not only littered and spat but also urinated on the floor of the National Chiang Kai-shek Memorial Hall, a site treasured by the Taiwanese.

Hong Kong feels similarly. Hong Kongers are tired of mainland visitors buying up baby formula and diapers. A survey showed that they hated the mainland Chinese more than the Japanese, who oppressed them during the colonial period.

The opening of Taiwan’s tourism business fanned anti-mainland sentiment, and in January, Tsai Ing-wen, a supporter of Taiwanese independence, became president. Since then, the mainland Chinese government may have intervened as the number of mainlanders visiting Taiwan decreased by 30 percent. Opening the island to mainland Chinese tourism actually ended up reducing exchanges with the mainland.

Liberalism, a core theory in international politics, advocates that expanding exchanges between nations brings peace. When you learn about different customs and practices, misunderstanding from cultural differences will be resolved, and countries will get along. However, the theory did not take into account that lack of manners would affect public sentiment.

Of course, it is presumptuous to think the mainland Chinese will remain rude forever. As Chinese people enjoy higher living standards and more international experiences, they will soon display sophisticated manners. After all, Korean tourists were derided as “ugly Koreans” not so long ago.

Before the “ugly Chinese,” there was the “ugly American,” a pejorative term describing loud, rude and uncivilized American tourists in Europe and Latin America during the 1950s. There has been a book and movie titled “The Ugly American.”

Lately, crimes committed by Chinese visitors, mostly on the resort island of Jeju, have become a social issue. While their manners will improve in a few years, it is about time their behavior is examined before Korean people’s antagonism toward Chinese visitors becomes irreversibly hostile.