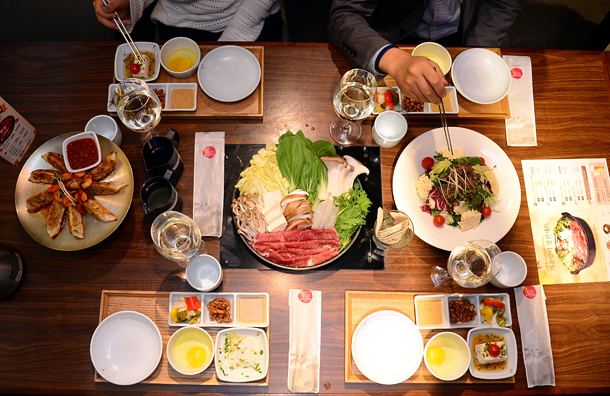 The “Kim Young-ran Law menu,” named after the new antigraft law, at the Bulgogi Brothers branch in Gwanghwamun, central Seoul. Full-course meals cost below 30,000 won (27.30 dollar) to comply with the law. [NEWSIS]

With a new antigraft law going into effect today, companies in various industries are expressing concerns that the restrictions on meal and gift costs may directly impact sales.

“We canceled every meal session with government officials reserved after the 28th, just to stay away from the worst-case scenario,” said one senior director at a local company.

“They say there won’t be much of a problem if participants pay for their own meals, but we would rather not go anywhere near violating the new law, lest we get caught as a model example [during the first few months of implementation].”

One senior government official said meetings with corporate personnel will be difficult in such an environment, even though they act as a primary source of information while conducting business.

“The civil service is becoming somewhat like an isolated island since most government offices moved to [the administrative city of] Sejong,” the official said. “We’re worried this situation might get worse once the new law goes into effect.”

Company departments related to marketing anticipate the most difficulty ahead, as lobbying activities and promotional events that include catering costs often fall under the department.

The information technology industry, for example, which operates many of its businesses abroad where similar laws are not as strict, is worried that the Korean law will impose limitations on marketing and public relations activities here.

“In other countries, costs for holding promotional events, lobbying and advertising are all appropriated as marketing costs, which overall go under ‘sales costs’ that are linked directly to revenue,” said a senior director of a tech company who works abroad.

A spokesman working in the industry cited an example of a Korean software company whose security program was recently selected by the American military.

“In the selection process, the company held trial events which provided small snacks and beverages, and that didn’t cause problems in the United States because there were no regulations that specifically prohibited those kinds of events,” he said.

Korea’s automakers, which also compete in the global market, are grappling with the same trouble. Events held for new launches or test drives have a high possibility of violating the new antigraft law, dubbed the Kim Young-ran Law.

Launch events, in particular, are one of the biggest projects undertaken by car companies. Foreign and domestic specialists as well as media outlets attend, and all of their expenses are often covered by the company. Even with the meals and gifts excluded from the bill, gas and car rental fees easily surpass 50,000 won per attendee.

“The new law might turn out to discriminate against local car companies,” an industry insider said. “Domestic companies will see limits in calling specialists and local reporters, while foreign companies won’t be subject to such matters.”

Retailers have already seen lower demand ahead of the law’s implementation. According to a report released by the Ministry of Agriculture, Food and Rural Affairs, sales of premium Korean meat gift sets saw a sharp year-on-year decrease of 19.2 percent, while relatively cheaper fruit gift sets saw sales rise 1.6 percent.

The report examined sales of gift sets at four major discount chains, E-Mart, Lotte Mart, Homeplus and Nonghyup, in the month leading up to the Chuseok holiday.

Flower farms have also seen sales drop due to a provision in the law that limits the cost of flowers used at celebratory and funerary events to 10,000 won. The Korea Florist’s Transworld Delivery Association said flower sales fell 40 percent this month compared to last September.

“It doesn’t make sense that the law would label the tradition of sending flowers to console or celebrate as unrighteous advances,” said a 35-year-old merchant who operates a flower shop in Dongdaemun District, central Seoul. “They’re flowers, not cash.”

Golf clubs are expected to take the biggest blow, but they have yet to come up with countermeasures. Concerns with the new law have already cost them bookings. Weekend reservations for next month at a private golf club in Yongin, Gyeonggi, fell 20 percent compared to this month.

“Considering October is usually a peak season for us, current sales are very low,” a club spokesman said. “The company even thought about making the golf club public, but it’s not an easy decision, so for now, we’re just observing the situation.”

The public relations departments of major companies such as Lotte Mart have started internally listing “Kim Young-Ran Law restaurants” where meals cost below 25,000 won per person.